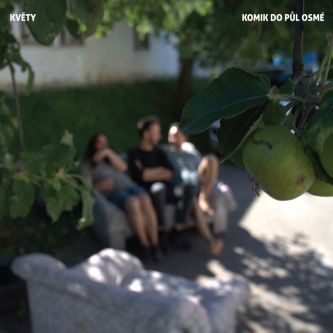 The new album, Komik do půl osmé (i.e. Comedian until half past eight) presents the rituals of the city. The auteur band, Květy (i.e. Flowers) through this recording leaves none in doubt that even after such a radical change of the line-up and sound, it has the power to look for new ways and at the same time keep its own unmistakeable style. The urban rock poetics of Martin Kyšperksý and Aleš Pilgr is on the new album, Komik do půl osmé, influenced sound-wise by new band member, multi-instrumentalist Ondřej Kyas. And thanks to him, Květy have amazing drive and groove. The songs of Martin Kyšperský sound great.

The singer, guitarist and the author of all the songs on the album, Martin Kyšperksý, has projected the  hometown of Květy into his music several times. Brno now has its biggest role in comparison to the previous eight albums. “Komik do půl osmé is a city record. There’s a map of trams, buses and trains of Brno in the booklet. We got this idea one day when taking the night bus connection.” Martin Kyšperský reveals and also adds why: “This album is about people that we met. It’s about how we feel now when we are 36. All our friends are there, girls, cafes, tram stops, streets, joy, cry, pain and hope. We fell in love with music again. Thanks to the new line-up, we started talking about it again. And even though the last year and half was super hard for us, we made it. Everything turned into joy and energy. It’s still Květy, unbelievably seventeen years old, but with new colours. On the way, somewhere further.”

The band Květy have performed and recorded four albums with the same line-up for eight years. But in Autumn 2016, there was a significant change when Martina E. Kyšperský and Aleš Pilgr complemented the multi-instrumentalist Ondřej Kyas, beside other activities also the founder and composer of Ensemble Opera Diversa. The bass player, Ondřej Čech and violinist Albert Novák left the iconic Brno band Květy. The last song in the old line-up was the track Město (i.e. City). Martin Kyšperský admits that it was not easy to change the working style, especially when giant circles are happening even in your personal life. “We got the Czech music Aněl Award for the last studio album, played perfect shows… but it was not enough. We starved for some movement. So we parted with the violinist and the bass player, who had been with us for many years. Only two of us with Aleš remained. His marriage broke up, my girlfriend fell ill. At that time we were already working on a new album and she took photos which are in the album cover but her disease was stronger and she never saw the album release. So the two of us, lonely and pretty ruffled mates, told the third friend who’s been our musical guest from the first recordings, that we need him and because only he could do it. Because he’s a fucken genius! And we have Onřej Kyas in the band, keyboard player and multi-instrumentalist.”

The new trio then connected through an energy that pulsates, and a super power blends throughout the whole recording. “It’s actually an album about new beginnings. We are a trio, at least we won’t play curls and twists but will have to work harder. And then the ride began. Ondřej Kyas came out with the album title. It’s a reference to your state when you have stage fright. We liked the way it sounded. Komik do půl osmé (i.e. Comedian until half past eight) has to fight with himself to get on stage. With his stupidity, embarrassment, shyness. We totally fight with it. About every tone. And it’s the best time.”

Ondřej Ježek once again succeeded in combining all the new sounds into a functioning whole and Komik do půl osmé presents the complex urban sound of contemporary alternative rock. This record is an accompaniment to life, with jingles from the night-time buses, as it is nowadays.