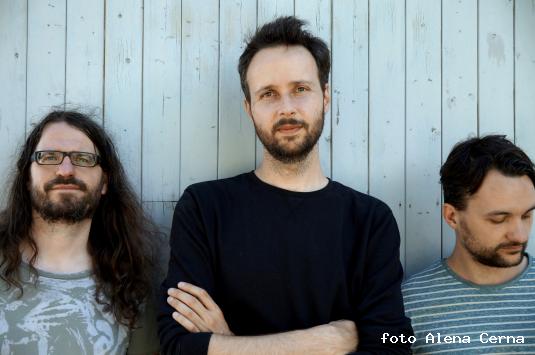 The band KVĚTY was founded in the very end of 20th century. The first group (consisting of singer and guitarist Martin E. Kyšperský, singing violinist Marta Svobodová, drummer Michal Navrátil and cellist Martin Růžička) has prepared two mono thematic programs. Those were two musical fairy tales “Red riding hood”, 2000 and “Palouček” 2001. Both shows were recorded on records published by them. The second one has recieved the Demo prize of 2001 in freemusic.cz.

In the year 2002 a new drummer and multi instrumentalist Aleš Pilgr comes to replace Michal Navrátil and the band is recording the album “Daleko hle dům“ (2003, all sold out during the years, reedition in Amakvaré records, 2009). The group starts having concerts more and reduced to men only trio publishes its first official album called “Jablko jejího peří“ (Indies records, also for all the following albums) in 2004. Concerts are piling up; the group goes to Serbia, Austria, Poland and France. The sound is also changing slowly and that’s why the Paris concert is the last one with violoncello and new member is joining the group - the guitarist and contrabassist Ondřej Čech.

The group is often seen on TV and heard in radio. The video Circus is even famous in American TV broadcasting. In their free time the group members are engaged in solo activities. Aleš Pilgr is invited to play with the group Ty syčáci, Martin E. Kyšperský is composing music for theatre, comes to the group of Lonely musicians of Jan Burian and is producing several musical projects. The band Květy has coming and going coworkers such as the photographer and filmmaker Petr Hegyi, the art director Pavla Kačírková, the singers Marta Svobodová and Dorota Barová, the programmer and designer František Eliáš, the sound master Broněk Šmíd and the manager Petr Zavadil. In circle of these people the group intensely performs and also records the trilogy “Kocourek a horečka” (2006, awarded with the Anděl prize for alternative and independent scene) – “Střela zastavená v jantaru“ (2007) – “Myjau“ (2009). So far the last album was recorded with a new member of the group, Albert Novák, the outstanding violinist  and also the producer and sound master Ondřej Ježek.

Outside of work on studio albums, Květy are offten asked to be part of other projects. In 2007, they composed the song "Malé proměny" for the compilation "Brno - Město básníků/Brno – City of Poets".  They participated in the tribute albums "Oldřich Janota - Ztracený ve světě" and "For Semafor" (with songs of the duo Suchý-Šlitr). In the spring of 2009 their version of "Právě tady"song by the band "E" is released on the album dedicated to the Brno alternative scene of the 80s (together with Midi lidi, Dva, Otk, Čoko voko etc.). They promised their participation in the recording –tribute to Mňága a Žďorp band. One of their songs can be found on the "3B - Bongo bonboniéra" album; it’s second part is coming out soon.