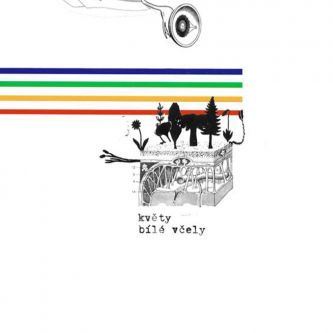 After a year, the Brno perennial flowers Květy blossomed again, this time loudly and without any ornamental leaves. Among the thorns that scratch and stick under the skin, you can find beautiful original Květy and songs by Martina E. Kyšperský on the album Bílé včely. This time, Květy chose a slightly different approach and with an effort of maximum concentration they recorded the album in four people, intentionally without any guests, with emphasis on the rawness and authenticity.

The album Bílé včely was recorded with the sound engineer and producer Ondřej Ježek in the summer of  2012 in Prague. The songs have been forming for years and the band reduced their structure, while the melody is accentuated more. Beforehand, it was decided that such material is not played by the band without guests.  “There was a need for different concept. Only the energy of the four of us. And then I felt that it would be best if I sang all those songs by myself, because I know what they are about.“ Martin E. Kyšperský explains the absence of at other times so characteristic guest singers. Since the recording was done by Ondřej Ježek, it had to be reflected in the final recording. On the album, there are hardly identifiable, mostly electronic sounds. “This has to do with the fact that the album was created only in the basic line-up. Ondra Ježek wouldn’t be normally able to keep it down and he would record various instruments there (and he can do that!). We told him that we don’t invite guests, but he can, because he is actually part of the band now, a part of the family. He had a solution: there were no additional instruments, but he added different echoes, odd sounds, squeaks and totally sweet-sounding echoes. He created it out of sound fragments of our own recordings. Ghosts in the machine.“ In some moments, the band sounds really dirty, but always with tenderness.

Martin E. Kyšperský is the sole author of music and lyrics. Where does he draw inspiration, so he can make a new album every year? “One song was written based on a weird dream, another one was recorded, then played backwards and then we added vocals. Calculator, baby cashier, hand spin-dryer and old voice recorder with almost completely flat batteries. Long lost classmates, old and tired people that nobody wants to listen to, forest, bad shepherds who offer false consolation...“ The world according to Martin E. Kyšperský is extraordinary, fascinating and worthy of recording. If you are not afraid to be scratched by thorns, you shall receive rich rewards when listening to the album Bílé včely.

In the epic booklet, the human cells are changing into plant cells. The album is released on CD and on vinyl.