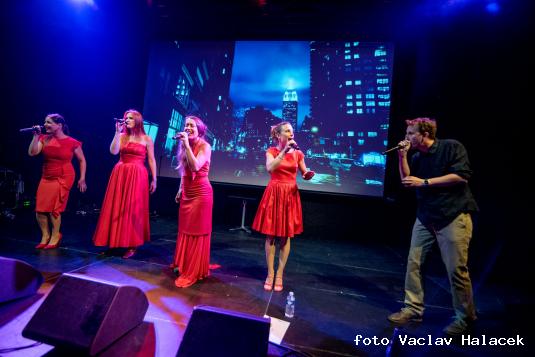 Yellow Sisters Bio The Yellow Sisters is primarily a female vocal group that crosses the genres of soul, funk, r’n’b, world music, jazz and reggae. Because of their vocal creativity, the Yellow Sisters are often referred to as “sound illusionists”. They experiment with melody and rhythm and look for new ways of working with the voice. They are, arguably, the most original Czech a capella group, and their music is authorial. Throughout the 2016/2017 season, they have been performing together with their guest, beatboxer Jan Melichar. The Yellow Sisters have been performing as a female a cappella group, with their own repertoire, since 2005. The following year, they won the “Colors Talents” contest for their debut album, Singalana. During their career, they have performed in 11 European countries, toured Spain and performed for two Czech presidents. They were introduced to a wider TV audience during the Czech TýTý Awards (2006). After that, Michael Palin, the English actor from Monty Python, chose them for the BBC travel documentary, “New Europe”. In the following years, they supported world famous bands such as the Blind Boys of Alabama, and performed a private show for Bobby Mc Ferrin in the Congress Center in Prague. They were guests on a compilation soundtrack remix of the Japanese film Nautica, performed at the Czech ball in Brussels during the inauguration of the Czech Republic to the Presidency of the European Union, and accepted an invite to London, where they had an hour-long show on BBC radio. Their second album, Tubab Woman (2010), was ranked seventh on the World Music Album chart, “Spin The Globe’s Top Ten”, alongside Salif Keit and the Gotan Project. In 2015, they performed at a prestigious a cappella festival in London. They also performed in Rorschach in Switzerland and at the European Cultural festival in Algiers, where they represented the Czech Republic. They were awarded the “Golden Diploma” at an international competition for vocal bands in Graz, Austria.