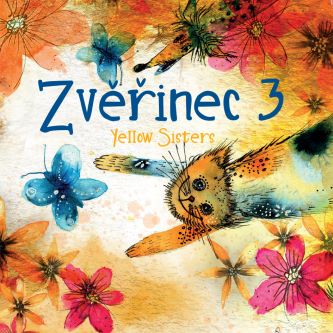 Joyful And Dancing Songs For Children, Parents, All Animals And Dormouse Or Marten. The vocal quartet Yellow Sisters is back with another sequel to their legendary Zvěřinec (i.e. Menagerie). The third part brings another 13 joyful and dancing songs, which are sung by both the smallest children, their older siblings and their parents. Yellow Sisters are accompanied by regular guest beatboxer and singer Honza Melichar. In addition, the Yellow Sisters have chosen a special guide, the ukulele, that  became a special musical instrument on this record.

The reason for another album with children's songs is obvious for Yellow Sisters. "We are 4 singers, composers and mainly moms and our mission is children's work," explains the singer and author of several songs on the album, Bára Vaculíková. In addition, she adds information about a new love: "We've been making new songs for a year now and we're totally in love with the ukulele. We discovered its beautiful sound and the lightness with which you can learn to play it.” The new album Zvěřinec 3 was created under the influence and accompanied by the ukulele that the singers got really fond of.

And not only thanks to the ukulele. The third album is different. Thanks to the adolescents, the new stories brought an inconspicuously more "adult" sound. The Yellow Sisters still have their unmistakable original handwriting, and in addition, another rodent is playing on this album. "The stories that we have in the songs came to us by themselves. They are mostly inspired by specific memories from our lives. So it wasn't a problem to put together a new album without repeating yourself. Although,  on the last record, we had a marten on the roof and on this one a doormouse. But there was nothing to do with it, it was simply really there," admits Bára Vaculíková.

Next year, the Yellow Sisters plan to release a songbook of all their children's songs so that you can play them yourself too. You can support its production in the public collection at Hithit. And soon you can come to sing with the Yellow Sisters at a special concert, the official release party of the album Zvěřinec 3. Don't miss it - it is on Monday, December 20, 2021 in Prague's Malostranská beseda.