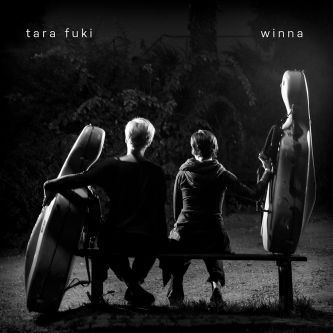 The duo Tara Fuki managed to prepare an extraordinary musical experience on the new album Winna. Their new recording Winna is as silent and velvety as a night and powerful and ferocious as a spring stream at the same time.  The mutual understanding and creative spark between both ladies has been so strong while recording the album that they made do without guests which is in the best sense a reminder of their debut album Piosenky do snu. Now, four years after their fourth studio album Sens, Andrea Konstankiewicz with Dorota Barová put together and merged their cellos and voices and gave rise to nine tracks. Two ladies, two cellos, two voices and their fifth studio album called Winna.

The album recording took place in Prague in the summer of 2014, in the studio Cyberbaobab in cooperation with Miroslav Chyška (Ilustratosféra) who is also involved as a producer of the CD.  The author of most of the lyrics, Dorota Bárová, confirms that the concept of the album was clear from the beginning: “From the beginning we wanted to make the album on our own, without guests.  We felt that the material and ideas are powerful. Of course, it is not just a recording of songs as we play them at concerts. We took advantage of the possibility of recording in the studio and for some songs we added other melodies.”  The result is an acoustic recording of strong melodies which refers to the highly acclaimed debut Piosenki do snu.

On previous recordings, Tara Fuki have been using electronics. This time, the album is pretty much electronics free. “As the songs were created, there was no need to spice them up with electronics. I think they work out well just as they are. I think it´s also because of the fact that we still think acoustically,” says Dorota Bárová. She is the author of seven texts which are, as in all previous recordings, in Polish. The ladies haven’t forget their favorite Polish poet,  K.K.Baczynskeho and they set his poem Piosenka dla Anni to music. Yet, there is one exception on this album, and it is the only Czech text Závrať, which was written by Andrea Konstankiewicz.

Although Andrea Konstankiewicz lives in France and returns irregularly to the Czech Republic, Tara Fuki continue in their activities. “It is true that this complicates a bit the preparation of recordings but four years is not that long a period. In addition, in the meantime, we were creating new songs that we have been playing at concerts for a while now. But of course, the distance between the Czech Republic and France is playing a role. Also, my son was born, he will soon be one year old :)“, says Dorota Bárová about why Tara Fuki perform and record so sporadically.  But at least the ladies focus more on the refinement of their recordings which is appreciated and valued not only by their fans but also by professional critics and ladies have already received three Anděl Awards.

The collection of nine tracks conveys a very intimate and urgent atmosphere of autumn and rain. Its gentle rhythmic repetitiveness encourages to deeper perception of the evanescence of time and together with the spellbinding vocals of D.Barová it brings us back to the prime beginning where everything is yet developing.