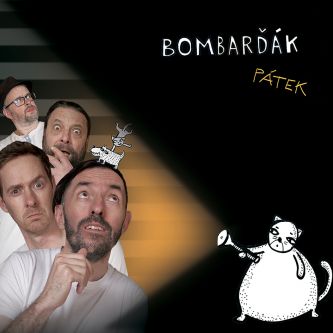 Bombastic Friday Is The Best Start To The Weekend You Can Wish For With Your Family.

The fifth album of the band Bombarďák is once again aimed at the diaphragms of children and their parents. The album is called Pátek (i.e. Friday) and the quartet (Jiří Jelínek, Michal Dalecký, Filip Nebřenský and Matěj Pospíšil) travels in it not only across musical styles but also throughout themes. Just read the letter that Bombarďák prepared for his fans.

Bombarďák recorded a new album for you. But everyone had respirators over their faces and weren’t allowed to sing. And it wasn't allowed to leave the cities you lived in, so creating the songs was pretty adventurous.

For example, Jirka sent a lyric to Matěj and it was about a guy who really has a special name RAMIR ... but the computer did not have the letter R. And so Matěj thought that it was a different letter, so we now have a great song about KAMIL!

Or Jirka sent Michal a lyric about speech therapy and Michal added music to it and recorded it and sent it to Jirka. And he would also like to sing it… but he could not utter the sentence "Jenomlogopedtenvíkmátátátrátrétrý" in quick succession. And that's why you will hear Uncle Michal's velvet voice sing in the song.

In the meantime, Jirka answered Filip's question "Where are you going on Saturday?" with the quarantine answer "NOWHERE" - and what do you think? Yes, Filipes set it to music! And it's the penultimate song!

We wanted to name the CD "NAZPÁTEK" and it was supposed to be about pigeons coming back (because Michal was born in Holice), but Matěj couldn’t fit it in the picture. So it's now called "PÁTEK" and it has a black cover! It was supposed to be gold, but the producer Přemek used up all the gold paint for the eaves of his house. And when Ondra Ježek was mixing the sounds, the pizza maker Slávek brought him lunch. And because he had no change to return, he recorded an accordion on the songs.

And the song TELEFONÁT (i.e. A Phone Call) was sung by the Hungarian singer Hútutata Lahdogárošová, but on her way through Slovakia she was attacked by local fans of her aliquot voice in Prešov and kept there for so long that she learned Slovak and sang everything on the phone under the pseudonym Veronika Husovská.

The song VÝLET (i.e. Trip) , which is about four aunts, was supposed to be sung by four singers, but Tereza shared a pandemic with the panda. Adéla went to Poland to demonstrate for the rights of sea lions, so Johana and Eva had to learn to speak belly.

And then I could tell you, dear children, how we composed the song Třicet osm (i.e. Thirty-Eight) on a raft on the Vltava!

And drummer Michal played the song VLOČKY (i.e. Flakes) in gloves, but icicles.

Dear children, one song is about a girl who can LIE first class! And the song is called LHÁT. 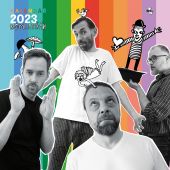 Královničky
Available on
buy from $ 4.02