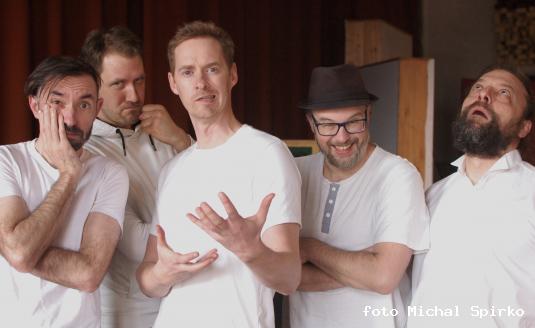 Bombarďák is the name of the band whose beginnings are related to the band 3B. BomBarďák, the main character, the beatboxer and the guide from the album Bongo Bombarďák, first became an inspiration for the children’s musical-theater performance Příhody kluka BomBarďáka! (i.e. The Adventures of the BomBarder Boy). It has its premier at the festival Colours of Ostrava 2012. Based on this, the “blue” record, Písničky kluka BomBarďáka (i.e. The Songs Of BomBarder Boy) was released in 2013 by Indies Scope. In 2015, the debut is followed by the second “yellow” album, Píp. The third album is “red” and is called 3FO3 and the released date is autumn 2017. The author of the show and all lyrics, Jirka Jelínek, is in the band together with Michal Dalecký, Filip Nebřenský and Matěj Pospíšil, who are responsible for the music. Bombarďák have played more than 200 shows and done performances throughout the country.