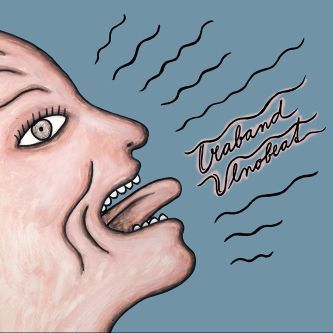 Started up and released. Traband's Lovepunk foreshadows a high octane number and a proper use consumption of strings. The recording is called Vlnobeat and fourteen songs by Jarda Svoboda have been changed into cheerful punk, radical love story and lyrical protest songs. Beats move and roam on the foundation of dance and rock rhythms, conveying the feeling of psychedelia of the 60s, through country music and torn punk they go back to the beginnings of the best stuff by Traband. Compared to previous albums there is less of storytelling and the epic songs of last albums are now completely missing. You can get carried away on waves of emotions, joy and sadness, euphoria and disappointment - yet always with determination "not to have the joy taken from us", as the refrain of one of the songs goes. The album Vlnobeat will be released for the 20th anniversary of Traband's existence.

Traband recorded Vlnobeat in their traditional formation (tuba-trumpet-guitar-drums), completed with a five-string banjo player Radim Huml. Although banjo evokes bluegrass and country music style, Traband adjusted this instrument to rock and dance beats, sometimes even resembling the psychedelia of the 60s. The album was recorded in Bubny studio of Michal Ditrich, whose musical past (Hypnotix, Babalet, Abraxas) has affected the band as well. As Jarda Svoboda reveals, the recording was being made in a spontaneous manner. "Music improvisation, I think, is not our forte at all and a careful preparation in the studio even more so. Some of the songs were created right in the studio, some improvisation was left in there, but in general, the most important thing is - just like with any other Traband recording - a compromise between spontaneity and intention.“  They managed to capture the enthusiasm perfectly this time, the joy of recording is overwhelming, so is the aversion to pigeon-holing of music styles. "We were never concerned with music styles and genres so much, only when some music journalists were trying to push us to one of them. For example, for years I had to repeat again and again in all the interviews that we don't play the Balkan brass music' and it was useless most of the time anyway. In fact, we are stealing all music styles which find interesting including the brass music, and we do with it whatever we can and whatever we enjoy to do. So in Vlnobeat album, Beatles go hand in hand with Jožo Ráž and U2 with Jiřina Bohdalová.“ Says about the current style of the band Jarda Svoboda, the author of all songs in Vlnobeat album.

The last three albums of the band were all about stories, epic lyrics or even lyrical view on human fate and the landscape which we live in. This time, Jarda Svoboda, the sole author in this album, went the other way. He goes back to lyrics and the stories get in it in a very abbreviated form. Which doesn't mean there are no stories left, says Jarda Svoboda. "On each album I'm trying to capture some wholesome atmosphere, a story, so the album is a real album and not just a mix of different songs. That's how I perceive every album we make and I can say that each of them is different from the others." But since the last album, the form has changed dramatically. Jarda Svoboda added some radical attitudes in the lyrics and doesn't hesitate to define himself to contemporary society. "I stand behind everything what I'm singing about. It is my civic attitude which I sometimes reveal when I feel like it. Whether is radical, I don't know and don't care.“ Though it is hard to say whether the album is depressive - to the contrary, despite a number of serious texts, the album contains very positive lyrics as well, love songs and the overall tone is downright encouraging. "Well, I consider myself a life optimist, so I never speculated if I make the songs optimistic or not. The intention was to make a good album. Yeah, I actually wanted to write something against 'bad Czech mood' , about the eternal whining and complaining.“

The album Vlnobeat will be released for the 20th anniversary of Traband's existence.