„clearing program“ with all attributes of the viral infection
The Prouza is back with a new album and a new team. The statement that the group has celebrated its comeback this year the group denies by saying that it renewed its activity already in 2000 and since then Prouza can be seen on the concert podiums. Nevertheless, the concert activity was increasing during the last years and the group found out that it had sufficiency of the material to record an album. And therefore this album is the most important point in the present renewed activity and for this reason it paid maximum attention to it. “This album is not a matter of one or two years. The most important thing the Prouza experiences is that the ideas which were hidden deeply in subconsciousness are gradually comming up to day,“ says a new singer of the Prouza Karel Mařík. The preparation of this album lasted more than a year and the final production and mix were taken care of by excellent Dušan Neuwerth. The mastering was then taken care of by Tomáš Zůbek in the Soundsquare studio.

The new album called “V tichosti“ includes everything the listeners from the bygone times expect from the Prouza group. A crude guitar sound, autumn chilly mood of North Moravia, great songs, quality texts, nearly absolute absence of guests and maximum concentration on the atmosphere. The only thing the listeners from the bygone times may be suprised with is the absence, formerly thanks to a diction of such a distinctive singing, of Tomáš Hampela. However, the Prouza was not always a firm group of the desirables and during the times of its existence a great many of the musicians have changed off. “At first, we did not consider at all to continue as the Prouza. But new songs were created, there was a common idea, offers for musical performances were increasing, and in spite of the fact that during the years another personal metamorphosis occurred, everything remained as it was. I don´t think anyone from the former or current members would deal with such situation. The interesting thing is that from the beginning of 80s two tens of musicians have changed off in the Brumerova Prouza and subsequently in the Prouza. In fact, the only person which remembers the real creation of the Prouza and which has been playing continually with the Prouza until now is Láďa Franek.“ Also this Prouza´s album shows that the continuity of the group is going on and even a new great singer after Tomáš Hampela had left the group was found. Karel Mařík excellently contributes to the whole atmosphere of the album. Also for this reason it may be agreed to the motto being often mentioned in relation to the Prouza which says that “Names are changing, but the feeling remains.“ 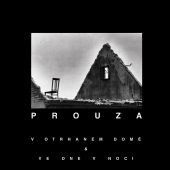