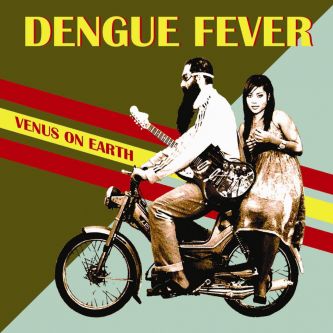 A sonic stew of Cambodian pop, American surf rock, Bollywood soundtracks & more.
The album release is supported by an extensive summer tour of some of the biggest festivals in Europe.
Strong press & advertising campaign, expect lots of profile around festival appearances.

"If there is any justice in pop music, we'll all catch Dengue Fever before the year is out."

WHO: Dengue Fever is in the vanguard of an emerging global pop sensibility, making music that's both
familiar, yet eerily unique. Fronted by Cambodian pop star Ch'hom Nimol, who sings in both Khmer and
English, the Los Angeles sextet blends the rhythms of '60s Cambodian pop - heavily influenced by
American surf, rock and early psychedelic garage bands - with their own eclectic mix of American and
international styles.

WHAT: There are echoes of Bollywood soundtracks, Ethiopian soul, American R&B, Cambodian folk,
Spaghetti Western weirdness and girl group angst in the mix, but the resulting concoction is all their own.