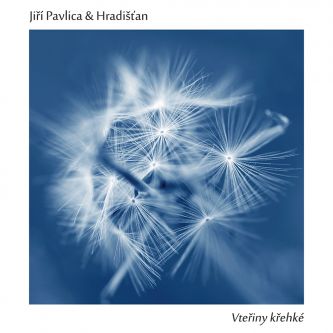 New author song album by Jiří Pavlica and Hradišťan is called Vteřiny křehké. Jiří Pavlica picked and put to music fifteen poems by prominent Czech authors that correspond to each other and form a harmonious whole, revealing the joys and sorrows of human life. With his unique musical feeling, Jiří Pavlica followed up on his older legendary albums and along with the unmistakable performance and sound of Hradišťan they created original and impressive album.

The ensemble has been preparing the album for several years with a great effort. For the author of all songs, Jiří Pavlica, this album is essential. “This recording is my personal testimony. It is the attitude of a man who lived through many things in life and has his own clear and continuous view on world and everything in it. To each of us, life can change completely within a second because each second of our life is very fragile and unstable. “ Selected texts by Jan Skácel, Michal Stránský, František Novotný, Dušan Vančura, Josef Veselý, Eva Kociánová and Alžběta Šáchová resonate with this theme and together make up an unified whole. The strength of the theme reflected in loose, balladic sound of the recording which is also confirmed by Jiří Pavlica. “Bearing in mind the transience of life, it’s logical that many songs are thoughtful and perhaps it may seem that the album contains more ballads than is expected from Hradišťan. While recording this album, my aim and goal of the entire Hradišťan was to capture the seconds which are reflections of those lived and unrepeatable moments that remain in us forever. Maybe someone will find himself in them, maybe someone will start singing them too.”

The album was recorded in spring 2014 in the studio Michael and besides Jiří Pavlica and Hradišťan, there were also other guests visiting the studio. The English horn and oboe were played by Vladislav Borovka , Michal Zpěvák played the not well known nai flute, there were the guitarists Jiří Kučerovský and Michael Vašíček who also played his mandolin. Besides the permanent member and lead singer of Hradišťan, Alice Holubová, there are another two female vocals in the recording - Vendula Pančochová, Kristýna Daňhelová. Also Jiří Pavlica and David Burda who are solo singers on the album invited a guest - Kolib. How and why it happened is explained by Jiří Pavlica. “I asked Alžběta Šáchová to write text about some kind of imaginary ‘seconds of temptation’ and she gave me beautiful lyrics both in Czech and in English and as it was a temptation for me, I put in music the English version.  And there was only a small step to the cooperation with Kolib who sang the song in English together with our original singer Alice Holubová. It was like a double temptation for me – to write and sing a song about temptation and in English on the top of it.” So one of the new things about Hradišťan, besides using the nai flute, electric guitar or rhythmic loop, is the song called A Second of Temptation in English. All this news only serves to overall colorfulness of the recording and they corresponded with the overall theme of the album.

Integral part of the recording is the album cover. The CD is packaged in digipack and contains a 32-page booklet. Each song is illustrated with photos by Vratislav Hnátek who is also the author of the title photograph.