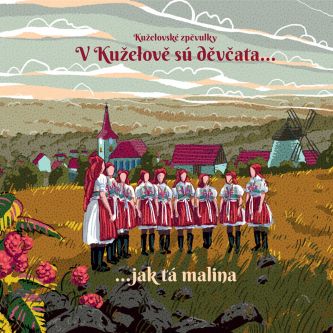 The girls' choir Kuželovské zpěvulky (i.e. Singers from Kuželov) presents its second album. A new recording of Horňácko folk songs V Kuželově sú děvčata ... jak tá malina (i.e. There Are Girls In Kuželov ... Sweet As Raspberries) is the story of friends who have experienced more than enough together. They grew up together, experienced their first loves, pains, but also joys. The nine-member choir recorded not only long peasant ballads or verbunks (i.e. Recruitment Songs) from the Horňácko region, but also one set from Strání region. The topic of all the songs is love and the choir accompanies Roman Sokol’s Horňácko Cymball Ensemble and Marek Potěšil’s HCE.

Kuželovské zpěvulky as a girls' choir began to sing in 2011, when they performed for the first time on the occasion of the Horňácko Festival in Velká nad Veličkou. They have come a long way since then and after their eponymous debut, they prepared a second album for their tenth anniversary. "We chose the songs together so that the theme was love," says Klára Halíčková, a member of the choir. "It is impossible to say who came up with the whole idea. It came partly from us singers and partly from the music ensemble that helped us a lot. We took advantage of the fact that the music is played by skillful boys, who also sing beautifully. And I'm talking about both Roman Sokol's HCE and Marek Potěšil's HCE. And so we sang these love sets with them. I would say that these dialogue love songs are not so common in Horňácko and you will not hear them often. And I would take this as an adjustment, otherwise we don't try to modernize anything and we sing as is the custom in the Horňácko region."

The album, in addition to the already mentioned Horňacko Cymbal Ensembles, also features soloists such as Richard Hála and Martin Prachař, but especially the Male Choir from Kuželov with its soloists. "This choir helped us with our creation. I remember how Uncle Ševeček then commented on our selection of the song in which it was sung: ‘děłaj semnů co chceš, obracaj ňa jak chceš, trebár hore nohama’ -- meaning -- make with me what you want, turn at me as you want, maybe with your legs up - it didn't suit much for 14-year-old girls, so we had to change it in the end."

The next performance will take place at the Kužełov Feast on Friday, November 12, 2021 in Kuželov. Kuželovské zpěvulky invited a special guest to this special concert. "The godfather of the album will be Martin Kománek, who is engraved in our memory and hearts on how they sing in the Horňácko region. Right till today we sing his sets at our performances, which he created for us." 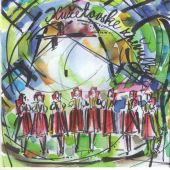