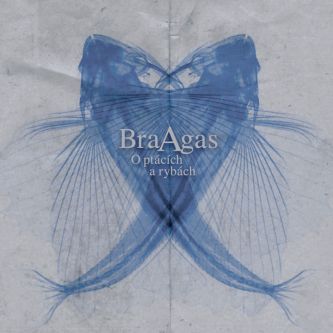 The all-female band BraAgaband offers beautiful rivers and dreamy skies on their new album called “O ptácích a rybách” (i.e. About Birds And Fish). On their sixth album, the ladies explore new ground thanks to these Czech songs. After a long musical hunt, the band finally returns home from other parts of Europe. They produced all thirteen songs, which come from the Czech-Moravian BraAgas song books, with their original approach and that has brought them many awards already in the past. In the role of silent witnesses to all the sad stories, the birds and fish gave the whole recording a name.

The new record carries the clear handwriting of BraAgas. Acoustic and unconventional instruments, stylish vocals and beautiful harmonies. Still, the recording was completely different. “Percussion has much less space in these songs than on the previous records, however, all the melodic instruments such as strings and brass got more. This brings the whole character of the album, which is more rigorous and less rhythmic than the previous one,” admits the singer and  frontwoman of BraAgas, Kateřina Göttlichová and assumes that the new record may attract different listeners. “Some of our fans might be surprised how sad the songs are on our new album. But that was our intention - to process these powerful folk tales. And that may address a completely new audience.” Nevertheless, BraAgas remain themselves and their fans don’t have to worry. Last year, the nyckelharpa joined BraAgas, a very interesting stringed instrument, originally from Sweden. It can be heard on the album quite a lot, together with the other usual “curiosities” such as the cister, the shawns, the chalumeau, the kaval and from time to time the bagpipes… Simply everything we like about BraAgas.

The return to domestic melodies has been planned by Kateřina Göttlichová since their first recordings. “Even then, around the time we got together, we had the idea of making a record where a bird would appear in each song. We were inspired by the “bird saloon” in the Lobkowice palace where we played. But when we were going through some collected folk songs, we found a few beautiful melodies where there was a fish - so the concept came into being. Songs with no birds or fish won’t appear on the record, even if it is really beautiful. We also liked the idea that birds ruled the air and heights while the fish was a symbol of water and depths. Moreover, as it turned out, the ladies enjoyed singing in their mother tongue and you can feel it from the record. O ptácích a rybách is an emotional and precious album.

What was the process of the song selection for the album:

The selection of songs happened during the night (when the kids fell asleep), when I went through Sušil’s collection looking for interesting songs or stories (with fish or birds). Then we went through them with Karla. Some songs came from the siblings Hrbka from their grandma’s song book. And finally we chose those that were to be used for the record. And so far, I’ve come across the fact that no one, except very few, knows them - so there will be no major comparisons. Like my two favorite ones - Brodil Janík koně and Husičky -- they are quite known. But we found out only after they were ready and there was no reason not to record them because the production is really different and I think they are pretty good like that. Besides, working on songs after such stars as Iva Bittová or Lenka Dusilová, it is quite a challenge.

We only have reactions from around us for now and they are quite positive. Many people are attracted by the fact that they finally understand our lyrics. We’re awaiting other responses with great curiosity. I have absolutely no idea what it is going to be like, but at the moment, it is personally important for me that I’m satisfied with the results and that I really stand behind this record, although I had doubts at first if it was a good idea to dive into Moravian folklore.

How does this record reflect the current line up and instruments?

The line up remains similar to the past. Compared to the previous record, our founding member and percussionist, Bety Josefa, is a guest - and of course, she created the booklet. We’ve  had another percussionist, Michaela Krbcová, since 2014. We invited our favourite guests - some parts were recorded by our sound engineer Honza Balcar during recording or mixing, Hanka Hrbková (our bass player’s wife) came to record double bass on some of the songs, Jan Klíma, who had been a guest on all our records, got more space, especially as a singer, and he may come up with us to some of our shows. We had a very special guest, Hearn Gadbois, playing frame drum and zarb.