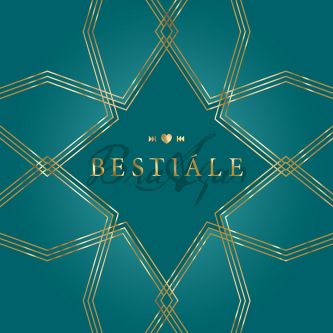 Two Czech Music Anděl Awards, third place in the prestigious World Music Charts Europe, dozens of concerts at home and abroad, five released albums and an EP. These are BraAgas. We will find more reasons for the recapitulation, BraAgas will look back on the past years with the release of Bestiále - the selection of the best of the published recordings.

"We see this selection as a gift for our fans. We've been on the scene for thirteen years, some of the older albums are basically sold out and people who buy our records directly at concerts have been saying something like that for a long time. And we’ll avoid Sofia's choice when they ask which of the records is the best and which one to choose :-)” adds humorously frontwoman Kateřina Göttlichová.

22 songs filled almost the entire album, the tracks were re-mixed and got new mastering. The album is published in an exclusive digipack CD, which was created in cooperation with a prominent painter of her generation, Alžběta Josefy.

BraAgas is a predominantly female band interpreting folk songs from all over Europe in original arrangements. In 2009 they released Tapas, which won the Czech Music "Anděl" Award in the World Music category, in 2012 the album Fuerte, which was nominated for the same award, and two years later the album Yallah!, again receiving the "Anděl" Award for World Music. In 2018, the band released the album "O ptácích a rybách", which in June 2018 reached 3rd place in the World Music Charts Europe.

A significant part of BraAgas' repertoire consists of Sephardic songs, Scandinavian and Balkan folklore, and they enjoy "odd" rhythms and melodies. On the last album "O ptácích a rybách", the band also focused on folk songs from Moravia. In their arrangements of folk music, BraAgas try to use the diversity of the origin of the individual songs and the interesting sounds provided by ethnic and historical instruments, over which great female vocals are soaring. They have performed at leading festivals such as Colors of Ostrava, MFT Zlatá Praha, Rainforest World Music festival, EBU Folk Festival in Cologne, or Sur Jahan festival in India.

The album release party of Bestiále will take place on September 2nd in area Gauč in Stromovka, Prague, CR, during which all current and former musicians who have passed through BraAgas will perform.