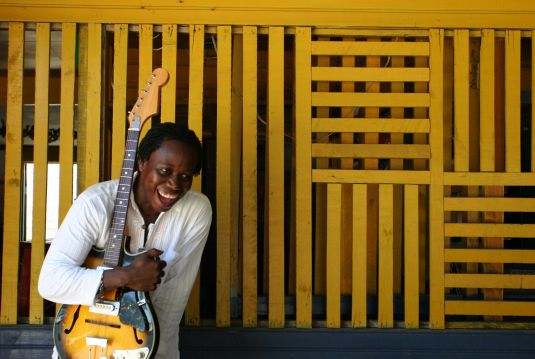 Born in the tiny coastal hamlet of Plaplaya on Honduras’ Caribbean coast,
Aurelio Martinez, 39, may be one of the last generations to grow up steeped in
Garifuna tradition. These traditions encompass the African and Caribbean
Indian roots of his ancestors, a group of shipwrecked slaves who intermarried
with local natives on the island of St. Vincent, only to be deported to the
Central American coast in the late eighteenth century.
Martinez recalls his humble but highly musical beginnings in his remote
hometown. “In the village I was born, there is still no electricity,” Martinez told
Afropop Worldwide in a 2006 interview. “When I was a child, I had very natural
toys. My first toy was a guitar I built for myself from wood taken from a fishing
rod. So that’s how I played my first chords.”
He learned these chords from his family, including his father, a well-loved local
troubadour who improvised playful paranda songs that embrace Garifuna
roots and Latin sounds. He became a drummer almost as soon as he began
to walk, thanks to his uncles and grandfather. From his vocally talented
mother, he learned to sing and picked up many songs she crafted.
A prodigy of percussion, Martinez began performing at Garifuna ceremonies
when just a boy, even at the most sacred events where children were usually
not allowed. By the time he left Plaplaya to attend school at 14, he was a
respected musician with a firm grounding in Garifuna rhythms, rituals, and
songs.
While attending secondary school at the provincial capital of La Cieba,
Martinez dove into diverse and innovative musical projects that took him
outside the traditional sphere of performance. He played professionally with
popular Latin ensembles, wrote music for theatre and pop groups, and refined
his musical skills with private teachers.
He soon founded a Garifuna ensemble, Lita Ariran, one of the first Garifuna
groups to appear on an internationally distributed recording. Martinez’s
virtuosic musicianship and passionate performances made him a mainstay of
the La Cieba music scene, where he was best loved for his take on punta
rock, the high-energy, Garifuna roots-infused pop genre that took Central
America by storm in the 1990s.
His musical career took a global turn thanks to his Belizean friend and fellow
musician Andy Palacio, who organized a major Garifuna festival and invited
www.realworldrecords.com/aurelio
Martinez. The two artists struck up a decades-long friendship thanks in part to
their shared hopes for the future of Garifuna music and culture.
Through Palacio Martinez met Ivan Duran, the tireless producer behind
Belize’s Stonetree Records, and participated in a compilation of paranda, the
Latin-inspired genre his father had favoured, a style that was slowly dying out
among the Garifuna. The comparatively youthful Martinez, youngest of the
three generations on the recording, proved that the music was still alive and
kicking.
With Duran, Martinez began thinking about the evolution of the music he had
grown up with, and his first solo album Garifuna Soul (2004) explored his
roots in both paranda and traditional rhythms. Martinez’s richly resonant voice
and soulful acoustic songs caught the attention of the global music press and
put Martinez on the map as a tradition-bearer with an innate musicality and
subtle innovative streak.
When not performing and recording, Martinez took on a new role in 2005: as a
representative to the Honduran National Congress, the first of African descent
in the country’s history. Devoting himself to a different approach to supporting
and promoting Garifuna culture, Martinez set aside his music making for years
as a legislator and politician.
However, it was Palacio, himself involved in politics in Belize, and Duran who
brought Martinez back to his first calling, music. In 2008, Palacio passed away
unexpectedly at the young age of 48, leaving the Garifuna community stunned
and bereft. ”Aurelio was still a congressman, but he left the congress session
to go to Belize for the funeral,” Duran recalls. “He hadn’t been playing guitar
for months because of his intense political commitments. But after Andy’s
passing, he gave a few concerts and he knew he needed to start recording
right away.”
His new album Laru Beya was not only a way of honouring Palacio as a
person; it was a means for continuing his mission of uplifting and expanding
what it meant to be a Garifuna artist. Together with Duran, several veteran
Garifuna musicians, and the occasional local ensemble dropping into the
studio, Martinez began laying down the tracks for this recording in a cabana
on the beach.
Taking up Palacio’s mantle as bard and advocate for his people, however, did
not mean Martinez stopped his exploration of new approaches to Garifuna
sounds, in particular their musical links with West Africa. Thanks to a
mentorship with Afropop legend Youssou N’Dour (as part of the Rolex Mentor
and Protégé Arts Initiative), Martinez found himself in Senegal, learning from
the stunning singer, rethinking his arrangements, and meeting everyone from
big names in Dakar (Orchestra Baobob, who recorded with Martinez) to
www.realworldrecords.com/aurelio
unknown talents hanging out in the back alleys of the city’s poor medina.
The result is a lush journey marked with thoughtful reflections of the Garifuna
past, the sometimes difficult present, and the promising glimmers of the future
for artists like Martinez. “This album is about far more than just keeping
tradition alive; it’s about urging people to action when they listen. We’re
dealing with an emergency, and we don’t know if Garifuna music will survive,”
muses Duran. “But this album will show people in Central America and around
the world that Garifuna music is alive and well, and that artists are moving it
forward.”
“We’re not going to let this culture die,” Martinez affirms. “I know I must
continue the culture of my grandparents, of my ancestors, and find new ways
to express it. Few people know about it, but I adore it, and it’s something I
must share with the world.” 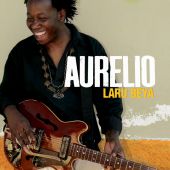