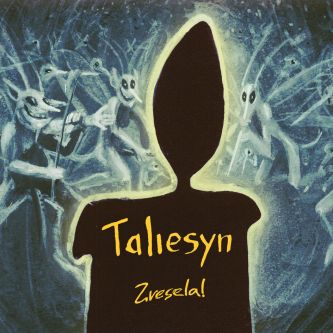 The music on the second album by the Czech band Taliesyn skips sadly and stumbles „Merrily“ (hence the title – Zvesela!) over and beyond styles – away from the traditional music of the British Isles and Czech and Moravian landlocked leas and across jazz, blues, even rock and classic. „Zvesela! (Merrily) is the chorus in the song Výčepní (Bartender) and it somehow fits the feel in most songs – gloomy, introspective or at times even mischievous“ says the singer Jan Bicovsky.

The 14 tracks were recorded in the V studio in Zlin over a fortnight. The band is still as delightfully unable to keep to one style as before. There something for everyone: three traditional songs – a lover’s complaint „Black Is The Colour“, a ballad about the polar explorer „Lord Franklin“, and the „Cobbler“, an Irish murder ballad of sorts once made famous by the late Tommy Makem. There are two blues numbers - Blind Willie Johnson’s „I Just Can’t Keep From Crying“ in a 5/4 time and Cyril Tawneys’s „Sally Free & Easy“, the first real British blues written, as the author claimed. The rest is Taliesyn’s own.  Riddlesong was inspired by the Pentangle as well as Old English alliterative riddles and opens the album with a question of love and death which the following thirteen songs are trying to answer, and warns that whoever attempts to break the riddle should “remember that not all is true that rhymes”. „Sentimentality“ portrays a maudlin burnt-out poet whose voice is gone and there is only the „cheap sentimentality he always was running away from like dog-hunted thief“. Next is a real treat for the die-hard folkies - „Výčepní“ - with prepared piano, uncertain harmony and lots of screaming and cursing followed by a little dainty dessert “Ten Cocroaches in A Jar”, which fades out and into „The Dead Travel Fast“, a tale of a dead man coming to stay with his young and false-hearted wife/widow who thought it too much to place the right amount of silver on his eyelids which made it impossible to pay for the Ferry. „Bosé tělo“ and „Viselec“ are both inspired by Moravian folk music (and yes – both about death and unfaithful love). On the more jazzy side, there is the rather frivolous Husy..., complaining that there is little justice in art as regards women – it is far less likely to lure a girl out of her clothes with a guitar than with a brush. And there is the minimalistic leave-taking monologue in „The Party Is Over“, with only the bass guitar and voice to speak of opportunities missed and the „last enemy – not invited but surely expected the same“. The last one – Café – is a simple and sad song to a lover lost and missed. „You unto me were as the melody is unto these words I’m seeking.“

The cover artwork by Filip Kazda is the reverse side of the candle-and-moths story. This time, creatures of the light come to burn in the black flame – playing their body instruments, smirking, sniggering and beaming with malice and lust while the flame flickers to the flutter of their elf-like wings. 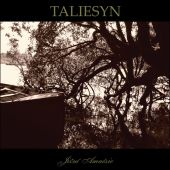