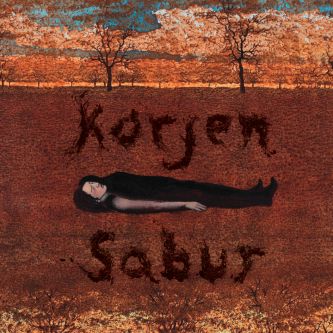 Sparkling, both gentle and wild female vocals intertwine in unconventional melodies driven ahead by disturbing, throbbing rhythms. The Korjen multicultural band presents their new album Sabur. Three singers from Bosnia, Poland and Slovakia cooperate with musicians from different parts of the Czech Republic, and together they create fresh modern arrangements for traditional Slavic, but also other European songs, and much more. Discover Sabur and let Korjen show you the taste of music from faraway lands.

Using original aesthetic backgrounds, Korjen singers have been interpreting the songs of their ancestors since 2010.

That was when three singers from Bosnia, Poland and Slovakia (with partly Armenian heritage) met musicians from the Czech Republic. The group of artists set up a base in Prague and from the beginning, it was clear what direction the band would take. Ewa Žurakowska explains that the band’s name characterizes its whole work. “The word Korjen has a two-fold meaning:  root and spice. A spice adds flair and makes meals distinctive. The cultures from which we draw inspiration often combine good music and tasty food seasoned with typical spices. Thus we combine our own distinctive cultural and “human” spices with the band’s creative process.”

There is a specific reason why the collection of fifteen songs that the sextet is now releasing is called Sabur. In translation, the word means patience and at the same time, it describes what patience entails. “The meaning is related to maturing. It is the point in time when we reap the reward after its entire growth process has been completed. This is the unique moment you have to patiently wait for.” Singer Aida Mujačić explains the background of the new recording: “The reward itself is a particular feeling resulting from good timing. If timing fails, you always know it and lack the sense of fulfilment. There was a chance that our recording wouldn’t be published. It had matured for several years, sometimes it moved by leaps and bounds, sometimes it was put on ice. But suddenly it is here. Now we feel the right moment has come and we are reaping what we sowed, and it was the life who decided when this time should come – it was not upon us.”

The band released their first eponymous CD at their own expense and christened it in 2012 in the Libeň Synagogue, where the songs were also interpreted in the form of theatre. The Polish multi-instrumentalist Lukasz Sabat is an important guest on the new album produced by Matouš Godík. “All songs are concentrated stories, and we treat them as if they were individual personalities. They have their own needs and carry messages, and they’ve been accompanying us for some time now. So we invited Lukasz to help us meet those needs” says Honza Šikl. During the recording sessions the band elaborated the songs on different levels. “We have carefully considered how far we can depart from the song’s original structure and what kind of adjustments can be made to preserve the song spirit. Sometimes it naturally fit into a particular groove, sometimes it was a gradual process and the songs retained their traditional shape and rhythm (Marike, Hoy Nazan, Yerkir). Then it turned out that some songs have twins in different countries, and fusions emerged (Ervum em / Mehmeda beacon, Postatnica / Kanchum em).”

Korjen have been actively performing for years, then a long period of inactivity followed. However, Sabur, the new album, brings a unique contribution to processing and interpretation of traditional music. It provides a meeting space, where a timeless story emerges and develops, offering inspiration. 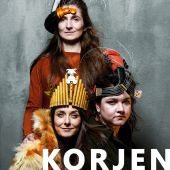