Al-Yaman is back. Not only on the stage but also with a new album. The album Insanyya is a new achievement of an extraordinary multi ethnic Prague formation Al-Yaman.

The sound of the band is a fusion of acoustic instruments and electronic music and merges traditional process and new elements of dance music. The Arabic influence of the group is mediated by the singer Ashwaq Abdulla Kulaib from Aden (Yemen). Thanks to her unmistakable vocals and amazing connection of dance motives, electronic music and Arabic songs Al-Yaman is considered one of the best bands of its genre not only in our country but also in entire Europe.

The second studio album by Al-Yaman appears in stores after five long years. The resulting album is based on the same elements as the first album Hurryia. The basic elements are the unmistakable singing of Ashwaq who sings, in our country still exotic language, in Arabic, and outstanding connection of oriental motives and current dance and electronic trends taken care of by Aleš Hyvnar (al-esh).  In case of the genre, it’s hard to classify Al-Yaman. They are mix of styles such as dub, rock, electro, ambient, bhangra and others.

After very well received debut Hurryia Al-Yaman had many concerts in our country as well as abroad. In summer 2007 al-esh and Ashwaq decided to discontinue their activities, though. Ashwaq wanted to take care of her family, Aleš needed more time for other projects (e.g. Cartonnage) and all together they felt the need to take a break from Al-Yaman. Anyway, at the end of 2008 they decided to renew touring and recording their new album as well.  The original group changed; the base guitarist Honza Lstibůrek (currently Toxique) was replaced by Jan Urbanec. Percussions and didgeridoo are played by Tomáš Reindl, percussion by Jonathan Omer (Israel). Jonathan had started family two years ago, therefore, because of lack of time, he will play with Al-Yaman occasionally as an alternance. Al-Yaman also has altering instrumentalists and occasional guests. A great guest in the album is with no doubt Amit Chatterjee (Indie/USA), an exceptional world renowned multi instrumentalist who sang in three songs. Just to name another one – there is the amazing MC Turner Harrison (USA).

“I will sum up my point of view with reactions of my friends, whom I asked for an opinion. Hurryia was more playful, more colorful and genre diverse. Insanyya is little bit more rock, more poignant, conceptually wholesome, less dance-y and more difficult to listen to, though, “ says the leader of the band Al-Yaman Aleš Hyvnar regarding to the style of this album. The album was being formed through the whole year of 2009 and the perfectionism of Alesh Hyvnar is pretty visible; he really took his time with every song and delivered a unique atmosphere.

The album is completed with a “pimped up” cover. “The artist Jana Machová came up with an idea to carve out the names of particular songs.  Then, in three months, she carved out 15 stones (marl). We are planning exhibitions at our opening parties in Brno and Prague.“  The party will take place in Brno (14.2. 2010) within the birthday concert “Lp MAM 20“ to celebrate the 20th anniversary of INDIES in Brno club Fléda and 16.2. in Palace Akropolis in Prague. 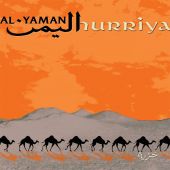