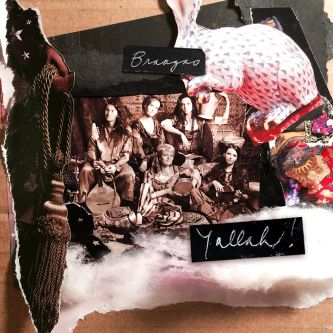 New recording of the band BraAgas bears a title which characterizes the entire album.  The exclamation Yallah! is commonly used in all Arabic speaking countries as a booster or incentive such as “Come on!”, “Let’s move it!”. The band again claims allegiance to Sephardic songs which form the majority on the album, but not only to them – the listener will travel through entire Mediterranean region – from Spain through Balkans all the way to Turkey. The album Yallah! is the fifth recording of BraAgas in seven years of their existence and the band presents here traditional European songs in their own arrangements. The band which is formed in four fifths by ladies won the Anděl Award nomination for the previous album Fuerte (2012) in the category of World Music and for the album Tapas (2009) they won. Yallah! follows the previous albums, this time with less electronic music which was replaced with energy, outstanding instrumentation and upbeat arrangements.

BraAgas on Yallah! aimed for Sephardic songs and songs from Balkan region (mostly from Serbia). “We still hold on to our favorite songs of Spanish Jews but this time the songs are collected from all over the Mediterranean – you can hear influence from Turkey or Greece. The Sephardi lived in Spain until 1492, and then they moved to all over this region. What we like about it is that the songs are at first very unusual for our ears – strange harmonies, odd rhythms… but given that this is folk creations passed on through centuries, the songs are very solid and seem wholesome and organic as they are.”

Kateřina Göttlichová explains the approach to the songs and the list of selected songs:  “We admit that while selecting the songs we focus more on melody and then the lyrics. Most of those songs are about love. In folk songs there are often many insinuations, allegories…especially on this album, there are several songs which can be explained in many ways and you can vividly imagine concrete stories behind the lyrics – for example longing or jealousy don’t change through the centuries…” (Note – lyrics and translations are available at www.braagas.com)

BraAgas play concerts abroad more and more often also at historic festivals. Also thanks to this their repertoire is leaning towards older songs. But the ladies are not afraid to deplete their song sources. “There are lots of songs; the folklore of countries whose songs we like to play, that is a bottomless well.”

The band BraAgas has returned to the studio in original formation. “But the bass (Jan Hrbek) and viola (Daniela Bryndová) which we use since the album Fuerte we will still keep,“ says Kateřina Göttlichová. And this time while recording in the 3bees studio they were fine with just a handful of guests. The one who couldn’t be missed was Jan Klíma who played Bulgarian back pipes in the Bilbil Pile song and Jan Balcar playing the guitar in Ocho Kandelikas. The album was again produced by David Göttlich together with Jan Balcar who, together with the band leader Kateřina, forms the time-proven creative trio. The fifth album by BraAgas presents the band in their top form and the joy of playing together was successfully transformed on the album Yallah! as well.