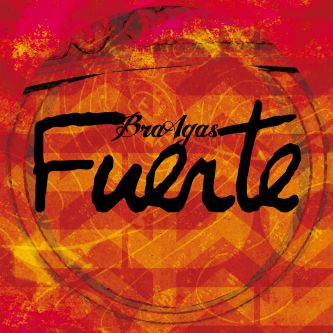 Fuerte is the fourth studio album by the band BraAgas . The new album is more dynamic than the previous album Tapas which was awarded the Anděl 2009 prize in the World music category. Undoubtedly, it’s the consequence of changes in personnel; the original all women quartet currently consist of 4+1 and the ladies still have superiority. “…I think that the band moved forward thanks to this. I have always tried to make BraAgas something more than just squealing girls’ quartet; it was the double bass that gave it the right dimension. “

The title alone (Fuerte means “strong” in Spanish) shows that there were some changes compared to previous recordings, the album contains more dynamic, almost dance songs. Of course, it is still the typical production of BraAgas, selection of folk songs from Iberia or the Balkans, countries whose songs BraAgas love to arrange. Fuerte has no aspiration to be compared to previous successful album Tapas, more likely the album loosely picks up where Tapas left off, mostly in the more dynamic moments of the band. BraAgas is a band which plays more concerts abroad than in their home country. After releasing the above mentioned album Tapas the band performed at many concerts and visited countries such as Poland, Hungary, Austria, Switzerland, Germany, France, Spain, Malaysia and in many of those they played several times. “This season again looks like we would be travelling a lot. Recently, France is really eager to see us, which is a shared interest. We will also play in neighboring Germany, but also a lot in the Czech Republic, it’s sort of fifty-fifty situation.”

The album was produced by sound engineer and musician Jan Balcar in the studio 3bees and he again cooperates with David Göttlich who re-mixed two songs. The band invited a guest to the studio, the accordion player Jaroslav Krosničan. The cover was designed, as usually, by Alžběta Josefa.