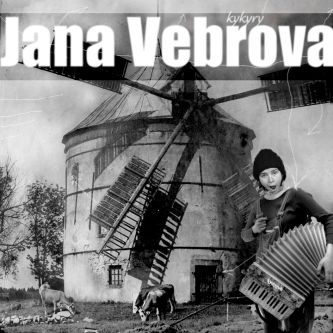 Jana Vébrová is a young singer-songwriter from Czech. Together with her accordion she composes and records her own songs and work by Ivan Acher who is also one of the musicians on this album. Not much English information is available about the artist, only that she writes poetic lyrics she has an emotional presentation. Unfortunately the lyrics are in her native language, so I cant write what I think about them. What is left is the music. The first thing I noticed is the way Vébrová plays the accordion. She uses it as a kind of rhythm and drone instrument and even that in a very simple way. In the opening track Kykyrý she shows her powerful voice by screaming her way through the song, to be honest it sounds to much over the top to impress me. Fortunately she shows in songs like Až mĕ vraní mrtvice and in the beautiful song Holůbek that she can be a fantastic singer. But somehow the best songs on this album, like the two just mentioned, are not her own compositions but made by Ivan Acher. Other thing that I noticed is that she is at her best when the drums, piano or other instruments play along. It takes away the attention from her indifferent accordion play and shows a very talented singer. The CD shows enough potential for the future but it has not the consistent quality I hoped for.