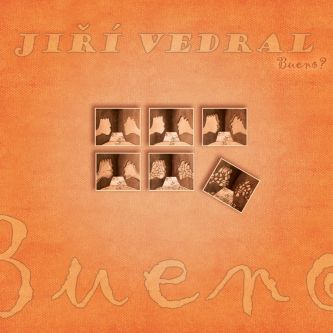 The new record created by Jiří Vedral under the watchful eye of producer Zdeněk Zdeněk was released on 15 July. It contains sixteen songs on themes including dancing foreign woman, still fisherman, cosmonaut, train disappearing in the distance, levitating roof, cinema, worrying golf players, yacht, sunbathing cat, whistling tea kettle and Karel Gott. But first of all, these are songs about relations and ordinary life. Don’t worry if you don’t know what Bueno is. The hero of the Bueno song doesn’t know it either.

Jiří Vedral, an impossible to categorize musician, signer and guitar player, began as a songster at the music scene of 1980s; he participated in Karel Plíhal’s first LP. His next steps took him to jazz and later traditional and ethnic music, which he presented at a number of tours abroad and recorded on 5 CDs. He never lost contact with jazz musicians, working with them from time to time on ethnic world music – the Muziga band (Lávky a mosty or Catwalks and Bridges – Muziga and Petr Kořínek’s Jazz Orchestra – ČRo 2003) and Horská karavana or Mountain Caravan with the Chinese female singer Feng-jun Song.

As a psychotherapy, he kept writing songs for later time, and when the offer for publishing this record reached him, all he needed to do was to open the drawer. Thus an album of songs originated, recorded live and in a hugely relaxed manner by a band of jazz musicians in the Barrandov studio. Sunny songs with an almost Californian spirit are followed by others that put us back in our place in a gentle but uncompromising way – only to be carried away by the next one. And everything turns into Bueno at the end!