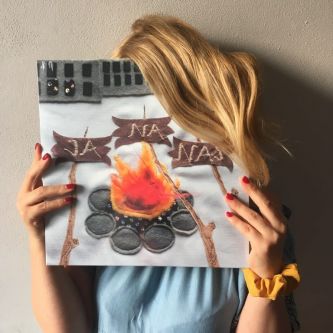 The debut album of Jananas – among the most promising bands in the Czech folk scene – is released in Indies Scope exactly at the turn of the year. The famous producer Martin Ledvina, who helped co-create the record, offers strong melodies, arrangements out of the ordinary and chiefly distinctive Czech lyrics.

There is no doubt that the Jananas trio is on collision course with all folk stereotypes and brings fresh blood into the still water of the Czech folk. It is certainly not offering anything offered a hundred times over. It is simply a band that you will not mistake for anyone else; something that counts nowadays.

“I don't like that most bands do not really think about their names. We had a marketing study done confirming that each Czech band which wants to make it must go for a dim-witted name. So... here we are and we want to make it!” Jan Vávra, Jananas.

Jananas immediately captivates its listeners by surprisingly good and thoughtful Czech lyrics abounding with multiple meanings, insight and intelligent humour. The songs respond to current issues as well. The typical band's expression and sound on the album is amplified by the unmistakable voice of the charismatic singer Jana Infeldová.

The album was recorded between March and November 2010 in the Reprague studio and was supervised by the producer Martin Ledvina (Aneta Langerová, Lenka Dusilová, Marek Ztracený, Tomáš Klus). The trio's vocals, guitar and bass-guitar were enriched by other instruments, such as drums and percussions. “It was essential that we did not give up and continued searching for what each song asked for. And so eventually we arrived at combinations of folk with dub or beatbox. Or we kept on looking for the correct keyboard register for so long that in the end we blindly bought old Delicia organ at an auction and only then it sounded right,” Jana Infeldová comments.

Jananas demonstrate that folk can be as current and up-to-date, unburdened either by “camping pot music” or bittersweet phrases. At the core lie catchy musical ideas and clever lyrics. Jananas took their time and spent a whole year in the recording studio. “We did not wish to recklessly cut the first songs that we came up with. Some preparation thus came before the album. We wanted to follow through on everything, so it was a fiddling work from the selection of songs to the cover art of the booklet. The final mastering also took place in Florida,” the guitarist Jan Vávra adds.

The album will be christened on February 8 in the Prague Malostranská beseda club. Jananas will set out on tour in spring with an accompanying percussionist. 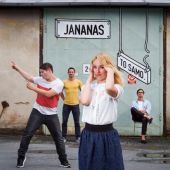