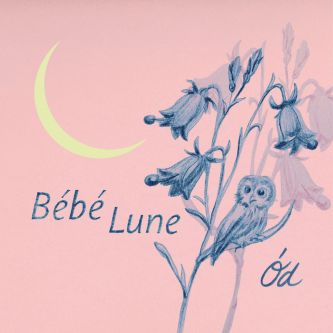 On her album Bébé Lune, Ód presents lullabies from the world

The musician and singer Ód has collected in her new album lullabies from France, the Czech republic,
Slovakia, Poland, the Netherlands, Finland, Sweden, Romania, Canada, Mexico, Mongolia, Algeria, India,
Guadeloupe and Tanzania. With subtle and tender harmonies, Ód accompanies her voice with flutes,
xylofon and balalaika. Keyboard and mbira also emerge from time to time. The listener may be surprised
by how different are the songs for a good sleep around the planet, and also by how Ód managed the
pronunciation of all these languages.

"When after 30 years, I heard the lullaby that my mom used to sing to me as a child, I was really touched.
I realized how deep such a small thing as a song can carve into your soul. And this is one of the reasons
why life enchants me." explains Ód to describe the beginning of her new musical project.
"I perceive Bébé Lune more than just an album of lullabies. For me, it is a set of songs from the world, a
collection of poetical texts in foreign languages. It may also be considered as a musical and meditative
escape, or even an invitation to an imaginary journey, not only for children, or those who cannot sleep."

Ód has been working on her album the whole year 2020. Her concept previously called Lullabies from
the world has won the contest for innovative projects “Expats for Brno”. With the help of the Brno
Expat Center, she invited foreigners to share with her their favorite lullabies. During personal
encounters, the selected persons taught her the pronunciation and accent so as her voice could sound
the most authentic as possible. During the spring, she worked on arrangement and melody. In the
summer she recorded at Jarda´s Svoboda, and worked with Jono Heyes on the mastering of the songs.
The fall was dedicated to the intensive work on the booklet with the illustrator Petra Jiroušková. The
result is a collection of 18 songs from 15 countries in one album with a leporello booklet.

Ód has collaborated in a few songs with the singers Beata Bocek and Marie Svobodová. From time to
time you can also recognise the guitare of Chris Coleman.

What do they think of Bébé Lune?

Beata Bocek: „When Ód contacted me in the spring 2020, I was just breeding my one month old baby.
And so my son Oleg became acquainted with the lullaby Mam Lale, which I sang during the „welcome of
citizens”. And thanks to Ód, the song is now recorded, in her way, which means gently and softly. I feel
very close to Ód´s creativity, whether in music or in theater. Her good pronunciation of Polish language is
also a proof of her abilities to connect to languages, and to her inner world in general. I would like to
thank her for being a small part of this nice and soothing project!”

Jono Heyes: „From a sonic perspective, the album as well as being a journey around the world retains a
simplicity and clarity built around the delicate voice of Aude and gentle and sublime harmonies. There
are also wonderful little surprises on this album that also don't fit into the preconceptions of what we
might consider to be a Lullaby. So in this sense I think the album can open eyes at moments to little
cultural differences of what a Lullaby is.”