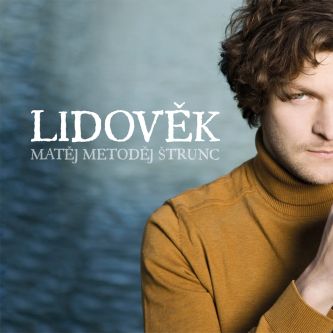 The Enchanting Metoděj Establishes The Folk Age - The recording Lidověk (could be translated as The Folk Age) is the first solo album of the actor and musician Matěj Metoděj Štrunc. Along with dulcimer, violin and other acoustic instruments, Matěj also infuses these folk songs with synthesizers, drums, and a modern electronic sound. The traditional songs, overseen in the production role by the popular singer Thom Artway, are reflected in the new album Lidověk in a new form and with a new touch.

The actor, singer and multi-instrumentalist Matěj Metoděj Štrunc, who comes from a musical family, has always been close to folk songs. "I chose songs that I remember from my childhood when my nanna from Rožnov pod Radhoštěm (CR) was singing them to me, or folklore songs and their magic to which I came across during dulcimer parties while studying at the conservatory," Matěj comments on the selection of songs for his first solo album. During the preparation of the recording, he made significant adjustments, which are also reflected in the title of the album. "I wanted people to know that there were folk songs on the record, but that they wouldn't be what everyone knew," Matěj says, explaining the title of the album Lidověk (The Folk Age). He also adds: "Those songs have had their ‘age’. At the same time, there is still some life ahead of them. And with this project we have tried to breathe new life into them and dress them in a new coat.”

Matěj Metoděj Štrunc has stepped out of the comfort zone of his previous work and walked off the well-beaten tracks of folk and folklore. "This time I decided to combine folk songs with a rhythm typical of the drum and bass music style. We worked a lot with modern sound design and balanced the proportion of live musical instruments with those recorded on a computer," Matěj describes his intention. At the same time, he admits that Thom Artway's production work also plays a big role in the result: “We have something in common in music, and that is that we both enjoy minimalism a lot. At work, I most enjoyed Thom's professionalism, commitment and empathy. He never pushed me into anything that would musically be against the grain. He let me create, but he chose exactly the moment when to stop me and gave it a clear concept so that each song has a head and a heel and a unified musical idea."

Matěj is also planning a number of concerts, but won’t be performing solo: “We’ll play as a five-piece group. The main pillar will be electric guitar / acoustic guitar, vocals, violin, dulcimer, bass guitar and drums. We’ll also spice it up live with the sound design from the playback that can be heard on the album. We have our first show on August 13, 2022 at the Music Marathon Festival in Brno, CR. We are planning the album release party for the autumn in Brno and Prague (CR)."