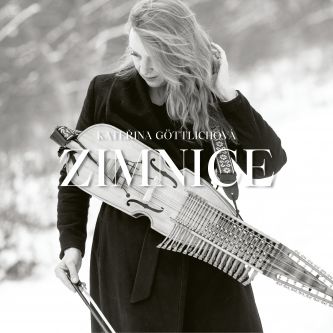 Singer, composer and multi-instrumentalist Kateřina Göttlichová is releasing a new album Zimnice (i.e. Chills). The versatile musician Jan Balcar, jazz double bassist Petr Tichý and keyboardist David Göttlich are guests on the debut album by the co-founder of BraAgas, who were awarded the Anděl Music Awards, CR. Zimnice will be published by Indies Scope.

The eleven-song record places the lyrics of Slavic folk songs with original folk music in contrast to today's technologies. The tangle of genre roots extends from Romani, Balkan to Hispanic music. Minimalist elements of creaking, squeaking and other natural sounds of acoustic instruments such as guitar or nyckelharpa were mixed into loops with the addition of electronics. The songs were recorded and mixed in the Bros studio by Jan Balcar. Pavel Karlík from SONO studio took over the mastering. Balcar collaborated on the album as a producer with David Göttlich, who took on the guitars and keyboards. In addition to double bass, Petr Tický recorded trombone parts. Göttlichová accompanies her singing on nyckelharpa and acoustic guitar.

"Folk song lyrics have been my great passion for a long time. They hide stories and models similar across cultures and centuries. It serves as an instruction, warning, therapy, and support. I read anthologies from the nineteenth century by František Sušil and Karel Jaromír Erben and looked in the lyrics for what will resonate with me the most or inspire me to turn it into songs,” says Kateřina Göttlichová.

Kateřina Göttlichová, together with the predominantly female band BraAgas, which performs folk music from Spain to the Balkans, is the holder of several Anděl Awards in the world music genre category. Their latest album O ptácích a rybách appeared third at the top of the international World Music Charts Europe in June 2018. The producer of Zimnice and a member of the concert band of the project, Jan Balcar, composed music for, for example, the Isole theater play by the Cirk La Putyka ensemble or participated in the BraAgas albums. Together with Göttlichová, they also worked on the Carnem project.

"I am very glad that Honza Balcar and Petr Tichý decided to play with me live, despite their heavy workload in other music projects. Vladimír Pavlíček will join us on the violin,” adds Göttlichová.