Non-exist nations’ folklore alias “Folklór neexistujících národů” or else tango, cabaret, circus, pop songs, kitchen beatbox or freakfolk.
The debut album of the project "Dva" is called “Fonók” (it is the name of spinners in Hungarian; however, for "Dva" it means “Sounds” in the language of their own) and it is very original and exceptional, both with its concept as well as non-exist nations poetics and sound which is novel and magnificent.

1.    Did you really find the name of your band in the fairy tale “The story about a chopped hand”?
We had been thinking for about one month, what our name could be. Naturally, it came to our minds that our name could be Dva+something but we did not know what. So we said to ourselves that a book would help us and that we would draw the name the way thousands of people do. We said one to another a page, row, word number. There was “dva” in the sentence: For two long days I had been troubled about chanciness”. First try. Unbelievable, is not it?


2.    Do you believe in number magic?
It is already our two thousands twenty second time we have been answering that "No".


3.    Had your music career been before Dva or is this your first band?

We had begun with common playing with The DNO Theatre from Hradec Králové and the band “Kratochvilovic zrzouni” in 2002. At that time, Honza had been playing in the Russian singing band „Aгaтa Kpиcти Pивaйвль Бeнд“. Later, we had played only with the Russian-French singing band „E pericoloso sporgersi and The DNO Theatre. Two years ago, we found out that it is much more complicated to coordinate a bigger number of people than 2 as for the time and space. So we formed the band only in two.


4.    Your album Fonók is like a guide-book for anti-linguist, do you travel a lot?
We like travelling. We were by our old Škoda 120 on our honeymoon in Lithuanian and Latvia two weeks. Sitting in the street and listening to the language, which we did not understand, was the best thing.

5.    What was the first: the conception of making songs "
Songs in non-existent languages were the first of all. But each of our languages has its base in some existing language. We often start from the listening to foreign-language net radios.

6.    Considering the fact of the gradual globalization, in a while, almost every folklore will be of non-existent nations, what is your relation to Moravian folklore?
Similar to Latvian.

7.    Did you have any model, what should the final sound of the album go like or is it Jayrope’s job?
Our model was a demo recorded at home which we wanted to leave only in versions which we were satisfied with. Quite strictly, we wanted to follow the sounds which are, except for instruments and toys, made through our path – voices or cable short-circuiting, snarling or backwards playing.  (Even the distortion in Strenge is snarled intensive mouth-farting). Principally, the cooperation with Jayrope worked thus that we had described the way the song atmosphere should be like and then he himself worked on the mix. After, we solved the final version together. It was very pleasant that we had agreed on essential decisions. Jayrope with his rich experience brought innovative ideas which refreshed that homemade sound of ours and advanced but preserved our specific "imperfection". Cooperation with Jayrope was ideal and very inspiring for both parties.
The album sound is also created by the equipment which we recorded with (these old microphones have a quite specific sound). And finally, the sound was influenced by space and complete atmosphere during recording.


8.    Dva are very agile, as for the use of electronics and Internet, notwithstanding, there exists a partial difference in evident liking in analog etc. Can you throw light on this matter?
Actually, we do not make differences between analog and digital in principal. In records, we enjoy sounds which we produce by “analog” way (voices, shorts) and as for digital “effects” we like loops and reversals.  But it holds for all the sounds that when we will not like them anymore, we will go any other way.

9.    The sound of the album is rich and solid, are you going to play songs adjusted from the album or are they going to have other alterations?
We are to change alterations of live versions to the album sound a little but naturally, Bára will not sing 4 voices together, even if... These versions will be different than the ones on the album for sure. Live performance demands a slightly different access than the album for listening without this live and visual element. Perhaps, we will manage to highlight best of both versions for a particular situation.

10.    Will you stay just two or are you planning to take new band members?
We take pride in the fact that we are only two who play and not only for the reasons of our name. We act as a unit where it is not explained a lot anymore. Every project with other people requires compromises which are amusing and bring something new but it is a different style than with Dva. 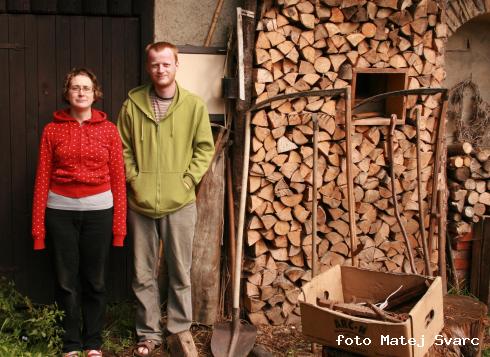