“The Headmaster“ – across the generations, he has been respected teacher from Horňácko, singer, musician, violinist, master of ceremonies, peculiar storyteller and collector of Horňácko folk songs. He is currently the oldest active singer from Horňácko; he is longtime member of Muzika Jožky Kubíka and the successor Dulcimer Band of Martin Hrbáč (until 1987, still as a guest today).

He graduated from Teaching Institute in Brno and he remained faithful to his native region – after finishing studies he returned back and taught at the school in Kuželov, Malá and Hrubá Vrbka, where he insisted on teaching local folk songs within music education; in 1983 he left the position of director to retire. Since 1987 until today he has worked as a guide in the windmill of Kuželov – he is probably the oldest active guide to national monument in Central Europe. His voice is captured on many recordings – the profile CD František Okénka – Preleteuo ftáča (Gnosis, 1996) was released to his 75th birthday. In 2010 his memoir book entitled Švarný šohajíček šlapával chodníček was published.
-Helena Bretfeldová- 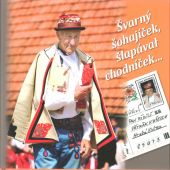