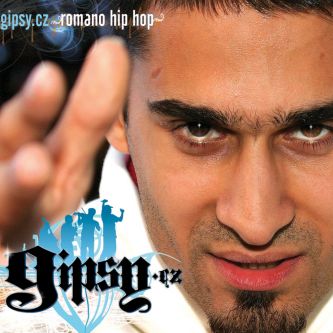 
I'm not trying to be cool with the lingo -- the above headline directly from a lyric in " Welcome to Prague." Rapper Radoslav Banga, aka Gipsy, spouts such lines with ease in English as well as other languages (Czech? Roma?) in his journey taking modern Roma music to a new level. His ensemble Gipsy.cz blends traditional music and instruments with pumped-up beats and rapid-fire rapping (and frequent exclamations of "Opa!" which apparently isn't just for Greeks...).

The album opens with " Tajsa," a song that will appeal to fans of Ojos de Brujo with itsGipsy.cz - Romano Hip Hop rap-meets-flamenco vibe. The tracks " Multin" and "Tecka" are are FCC-unfriendly (is it inevitable that profanities are the first foreign words one learns?), though both are strong tracks that deserve listening. And at the end of the album is a crazy a capella hidden track.

Easily one of the most enjoyable global albums of the year, Romano Hip Hop has already won a slew of awards and spent months in the World Music Charts Europe. And for good reason. Gipsy, violinist Vojta Lavicka, accordionist Petr Surmaj and his bassist brother Jan Surmaj make a glorious sound. Catchy as pop-laden commercial hip hop, Gipsy's music comes with the extra appeal of tradition-rooted melodies made modern.

Sure, his attitudinal boasting (some in English) comes off a bit simplistic but his delivery is solid and the arrangements tight as a drum. Besides, after generations of oppression, the Roma community is due a little cultural pride. So crank up this album, and you'll soon agree that these gipsy kids can get u down. Highly recommended!