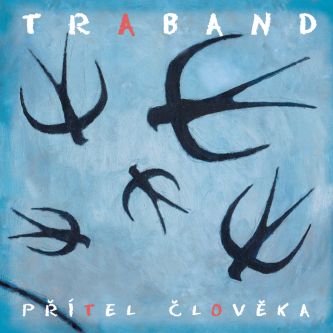 Přítel člověka
Available on
buy from € 12.92

It is not easy to describe Traband’s music. They play well arranged indie-“rock” music which seems to have some folk association which is not always clearly traceable, just used as any of the many elements. The great, almost ethnic flavoured, percussion, is completed by harmonium and bass and other occasional instruments and with some trumpet. The group themselves derive any sort of folk association to a different, more pure inspiration. They call their music “home music“ as a fine opposition to what is generally called “World Music”, which often became a cut-and-paste genre. “All the music, which patches together carelessly everything it comes across, folk songs from anywhere, in the best way from the Balkans, adds to it the functioning rhythmic or something else, non-homogeneous, without internal relations and connections has been getting on my nerves recently… I realize that we contributed to this properly in the past and at one moment I started to find it quite disgusting. I love, when the things are authentic, when the inner matters can be felt from them. That is why we returned to the home music making, to home resources and traditions.” This, new and self-renewing approach is in fact another level of true inspiration, and personally also makes the group themselves stronger. While their myspacec website recalls inspirations from Bohemian and Moravian folklore music, and village church singing, the fundament is or became entirely from their own inspirations. The fact, that every element tends to count as much, makes it harder for too much of a definition, but makes the music on an inspired level memorable and highly enjoyable. A really odd inspiration is the kind of hiphop track called “Tichy Muz” sounding something like an alternative to the usual musical format of a Balkan wedding. Well done.