The number of bands in which you played is quite remarkable (Kollerband, Bára Basiková Band, Pusa, Pan Pot and others). With which of the bands do you associate the happiest memories, with the exception of your mother band Monkey Bussines?
It’s hard to tell, everything mattered, but maybe the most intense was Pan Pot… There was enough fun everywhere. There was a lot more fun than bother. I can’t say what the best period was, as it’s been a long run since 1992.
Time has brought what it could and you can’t stop it. I don’t want to go back… I want to play and look ahead and return only with a few good old songs. Now I can say that concerts with Monkey Business are the most precise and most certain and there is no place for shirking.

After the velvet revolution I served in the Military Music Ensemble in Tábor and then in the Army Music Ensemble in Prague, where I stayed. I simply did not come back home and started to live in a big city. It was great. I met lots of musicians and from time to time solved digs and sleepovers…
For me, the cult of the 1990s was the BUNKR Club; I used to hang out and play there a lot.

An authorial album means laying your own head on the block. Is it a big change after playing with bands?
I always made demos and tried to spark a fire out of them. Mostly the bands with whom I played weren’t exactly happy with it. I always kind of felt I was a little bit off… Except of Pan Pot - there I was a usurping bandmaster :-))
The change lies in the unlimited space for feelings and ideas. Being a producer at the same time, I don’t have to face any grimaces and dissonances.

Is one of the reasons for Okrej the fact that the present musical “box” of Monkey Business is too tight for your ideas?
MB is clear information and you will agree with me that my authorial influence of Roman’s work would shift MB somewhere else, although we get along well and I can influence the direction with the guitar, too. I like even harder guitar, but this does not belong to MB. It doesn’t mean I wouldn’t participate in MB’s songs, but the core has been defined by Roman. You can’t do things like somebody else. That’s not the thing. The message is lost then. I had to do something with the pressure inside, so here I am. I shall draw a line here, and we shall see.

Compositions on your album have originated for many years. To what extent did you have to rearrange, replay them before publishing?
Only “Náhody” (Chances) are “old” and the arrangement is basically the same, only the live violin and viola are not there any more. “Olelali, Voda Tvá and Prezident” are younger pieces and the rest is a summary of the past two years. I had to replay them all and that's only one step towards arrangement.

Why is the album entitled "je to důvod" (that’s the reason)?
It’s a typing error; originally it was supposed to be "NA TEN DŮCHOD" (For Old Age Pension), but in the end I left it at that. The graphic designer would’ve had a lot of work, and I like it this way, too… 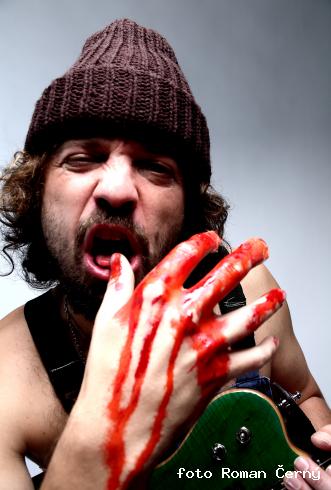