A one-day music festival in Brno new concert hall SONO Center celebrates the 25th anniversary of the company Indies which, since the beginning of its existence in the Czech Republic, pays attention to good alternative and non-commercial music. At the all-day-long concert there will be 17 bands and artists who have been releasing their albums at Indies Records label for past 25 years.

Milan Páleš, one of the founders of Indies, invites all fans of the independent music scene to celebrate: “February 14, 1990, which is already 25 years ago, a group of music enthusiasts opened the first post-revolution, private and independent store and CD rental shop. There was not much for sale at that time; everything was subject to censorship and dictatorship of government bodies and companies.  But it changed quickly after the opening of borders to the west. At the big concert in the Sono Center on February 14, 2015, together with our artists whose music we release, we will celebrate the fact that for past 25 years we haven’t had to ask or beg anybody when we want to listen and enjoy music which we love and enjoy. Therefore, the performers at the celebration will be Traband,  Už jsme doma, Kieslowski, Jablkoň, Docuku, Čankišou and many others.“

The gates of the music Sono Center will open on Saturday February 14 at 12:30 pm so at 1 pm the celebration can start with several performances for children who have the admission to this event for free. Mainly for them there will be the song performance by Amálka K. Třebická, concert of Bombarďák or the theater performance called Anička a letadýlko. The entire program will take place on two stages until the wee hours. The final dance party will be in the hands of the DJ Miss B. The entire program will be presented by the leader of the Květy band, Martin E. Kyšperský. 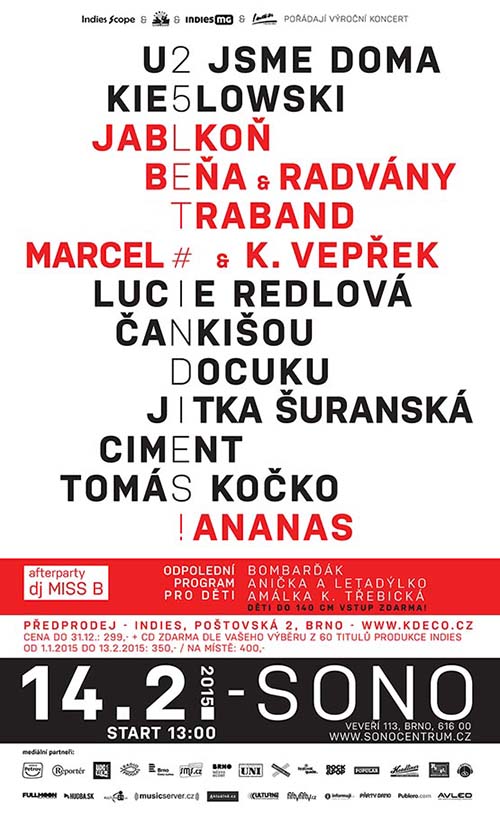 On February 14, 1990 the first music store and CD rental called Indies was opened, at that time on the 25 Milady Horákové Street in Brno. After a year of this store’s existence, the publishing house Indies Records was established, bearing the motto: We publish music that we like and enjoy listening to. From the initial rock music styles the publishing house has slowly opened up to different genres. Folk and folk-rock albums were released, then world music and folklore, but there were also blues, rock, jazz or rap.  In 2005 the recording Studio Indies was established and in 2007 the publishing house was divided into three independent publishers with a common distribution. Under the label Indies Scope there was the agency Indie Production established in 2009. Also the music store and concert ticket sale has been going on for entire 25 years. Under the label Indies, there have been released over 700 albums and titles mapping, with a few exceptions (The Frames), Czech and Slovak quality author music.  The original Indies has gone through a development and series of changes since its establishment in 1990. Despite the fact that there are now seven different companies and branches (Indies Scope, Indies Happy Trails, Indies MG, Indies Distribuce, Prodejna Indies, Studio Indies, and Indies Production), this label is always associated with good music.