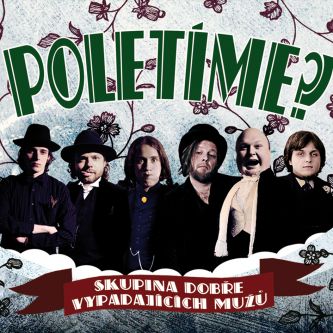 At first you start tapping with your feet, and then you tell yourself “oh, banjo, so it must be country, but no, wait a second….punk? What is he singing? “Then you realize you are already singing the catchy chorus and you want to dance. And that’s the best idea. The best thing is to leave everything behind and have some fun. Here comes the entertaining Brno band centered around the artist Rudolf Brančovský with their second album called “Skupina dobře vypadajících mužů/Group of Good-looking Men“.

Poletíme? go directly to the heart of the matter. Thanks to the catchy blend of rock, swing, punk, folk and country spiced up with a great deal of energy, sprinkled with a piquant portion of original sense of humor, they are successful in what they do. Life is short so why shouldn’t we enjoy it? Are you depressed? Well, we are too, it’s actually great (“Mám depresi rád/I love depression“) Do you have beard and don’t feel cool enough? On the contrary, beard is cool (“Fousy/Beard“). Have your girlfriend found more perspective partner? It’s time to scream loudly (“Sado maso”). The leader of the band Rudolf Brančovský also confirms: “If I had only one arm I’d be devastated until the moment I stood on the stage. I’d try to wave to people from the stage and then I’d choose a volunteer to play rock paper scissors with me. I’d finish it with me trying to give him money using my invisible hand as a thank you for being at the show. Not to take ourselves seriously – that’s exactly the message of Poletíme? to the people.“

Same as before, Poletíme? have recorded their new album in Brno studio G under the supervision of Jiří Topol Novotný. The album sounds a little rough and highlights the slightly unkept pub-like style of six-member band Poletíme?: Rudolf Brančovský – vocals, banjo, ukulele / Vojta Konečný – violin / Jáchym Hájek – trumpet / Ondřej Hájek – piano, accordion / Daniel „Kačer“ Černý – drums, timpani / Honza „Beran“ Beran – bass guitar, and three guests who completed the recording: Martin Škrobák -  tenor banjo / Pavel Všianský – helicon / David Kadlec – trombone. “At concerts we take the energy from the people, it’s a teamwork, shared entertainment in which we improvise a lot. At the studio, the situation is completely different because there we are alone. We have to process the ideas which we use intuitively at concerts. Poletíme? will sound probably differently if you  compare the sound on the album and at the concert, but I don’t think it’s a mistake,“ explains Rudolf Brančovský. Therefore it shouldn’t be a surprise that the band invited a dulcimer band called Púčik with whom they recorded the song “Když se dva opijí/When two get drunk“.

Poletíme? was founded by the leader of the band, the artist Ruda Brančovský and here he says why he chose this name for his band: “I can hear there the uncertainty of the guys who had added wings to an old car, of lovers who are standing at the edge of a tall building, of planes made of concrete, of hens planning to escape the henhouse, of astronauts glued with an adhesive tape to the racket.” The band started to play after other band Veselá Zubatá had finished. And here again, all the lyrics are written by Ruda Brančovský and they are very personal as he explains: “When you hear that a ghost visits me every night and keeps spooking me, it means it really happened same as the fact that I have been always staring at one girl. Poletíme? is sort of a continuation of Veselá Zubatá, because my life continues, just the themes and sound are changing.”

At the Brno album release party that will take place in Metro music bar on June 22 all the guests who had participated in the recording will be present. There will be a projection of videos and the evening will finish with the dulcimer band Púčik. 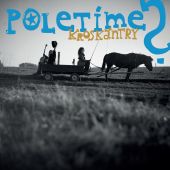 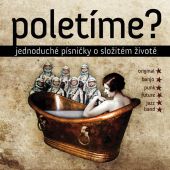 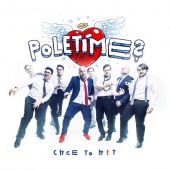 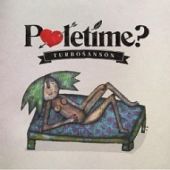