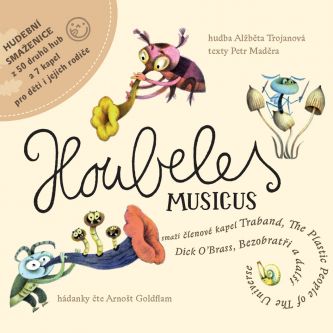 Musical Fried Up for Children and Parents. A musical mushroom atlas for both young and experienced mushroom pickers is here. Houbeles Musicus offers not only over twenty songs, but each of them opens up with a riddle read by Arnošt Goldflam (Czech actor and artist). The musical answers were created by Alžběta Trojanová and the musical fry up was spiced up by 46 musicians and actors, including members from bands such as Traband, The Plastic People of the Universe, Dick O’Brass and Bezobratři.

The album is based on the verse mushroom atlas, Houbeles Pictus (Práh, 2008), created by Petr Maděra who also prepared the lyrics for the recording. The author got motivated to write new texts, which were not part of the book, and are published for the first time in the original booklet as part of the digipack in the form of a flip book, illustrated by Miloš Kopták. The CD also includes a fairy tale that is partly read and partly put into a song, and several other poems from the mushroom world.

The music version of the poems is based on the tradition of the Bohemian and Moravian folklore, yet inspired by elements of jazz, swing, blues, rock and world music. Alžběta Trojanová describes the creative process of turning mushrooms into songs: “The music concept is always based on a text about a particular mushroom - for example, in the song ‘Love na lišky’ (i.e. Fox Hunt / mushrooms - Chanterelles), there are traditional instruments and harmonies inspired by the hunting music, ‘Kozák’ (i.e Cossack / mushroom - Bolet) and is accompanied by the instruments of Slovak herdsmen in the lydic scale to the rhythm of the Cossack dances, ‘Masák’ aka rosacea is dancing in a swing, ‘Houba na nádobí’ (i.e. Sponge for Dishes) sings its blues about its desire to become a real mushroom, the growing number of flies at ‘Hadovka smrdutá’ (i.e. Phallus impudicus) builds up in the rhythm of Csardas, ‘Jedůvky a prašivky’ or ‘Kořenohoubí’ (i.e. Mushroom Roots) have a rocky character, with a soft atmosphere brought by a pentatonic scale. Quite a few songs are spiced up by brass instruments, which fit into the mushroom world for their character - their music expression can evoke a kind of ‘clumsiness’ or ‘mischief’ of individual mushrooms and they can bring the element of humour, which is ubiquitous also in the text of the book. In addition, brass instruments are similar to the mushroom world in their shape. In some songs, there are exotic or lesser known instruments such as sitar, folk harp, flute or harmonium.” Most songs are accompanied by acoustic instruments that belong to edible mushrooms, while the electric instruments are used in songs about poisonous mushrooms as a whiff of the other kind of treacherous world in the world of nature. The aim of the musical version is to help children feel the  diverse musical harmonies and the moods.

The composition and lyrics are somewhat more sophisticated than a listener would usually expect in children’s music. The all-pervading humour and the characters of individual mushrooms will attract listeners both young and old; however, only the adults will understand some of the punch lines (both lyrical and musical). Alžběta Trojanová emphasizes the sophistication of the whole album: “I believe that children don’t desire a primitive simplification that is often presented to them by adults so as to please them. They love authenticity and variety which they see in their lives as well - and we try to offer it in this record.”