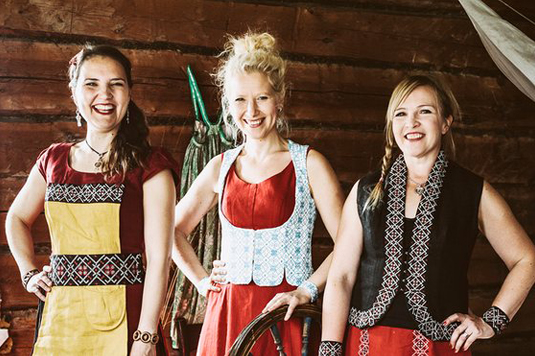 On recordings and in concert, the singers voices and unique harmonies are the main attraction. Their style is their own, born of the Värttinä collective creative energy but with deep roots in the women’s singing traditions of Finno-Ugric tribes of the east, including Karelia, Setu, Mari Republic, Ingria, Mordva and others. One key feature of these styles is extremely close harmonies, so close that they often seem strange to untuned western ears
Early Days:

In 1983, a small group of pre-teen girls in Rääkkylä, in the Karelia region of Eastern Finland, started by sisters Sari and Mari Kaasinen and their mother Pirkko, began to recite and sing old Karelian traditional poetry and songs, accompanying themselves on kantele, the Finnish national zither-like instrument. What began as a hobby quickly became a mission: to revive forgotten traditional Karelian songs and to present them in new ways. The group soon became 21-strong with fifteen singers and six young players on accordion, saxophone, guitar, double bass, fiddle and flute. Seeking new ways of presentation, the singers developed a more aggressive and powerful vocal style; loud, almost shouting. This vocal/instrumental concept was provocative and new to folk music and to Finland and Värttinä rapidly gained national recognition.

Interest in Finland grew quickly over the next five years resulting in concert performances nationwide and two albums. The first album, entitled Värttinä, recorded in Rääkkylä, Karelia in April 1987 and released on their own label, comprised traditional Karelian songs arranged mostly by Sari Kaasinen. The arrangements and presentation were exuberant and provocative and after their breakthrough appearances at the Kaustinen Folk Music Festival the same year, where they were named “Band of the Year”, the album became a favourite in the domestic folk music scene with word of the band trickling up to mainstream audiences.

The second album, Musta Lindu “Black Bird” recorded in Nurmijärvi in early 1989 again featured traditional Karelian songs, this time arranged primarily by Sari with additional arrangement from some of the other band members. These pieces were even more adventurous than those on the first album, slightly darker with more unorthodox arrangements. While perhaps not as well received as the first album, Musta Lindu did clearly indicate the more uncompromising side of the band as developing artists who were not out to replicate the past but instead were seeking to reinvent folk music.

In late 1989, as the youngsters in Värttinä reached the late teens, several members left the group. Many of these left music for good while others went on to study at Sibelius Academy Folk Music Department. Remaining members, the Kaasinen sisters, sax and bouzouki player Janne Lappalainen, singers Kirsi Kähkönen and Minna Rautiainen chose to keep the band going, with Kaasinen sisters and Lappalainen also entering Sibelius Academy Folk Music Department. By this time, the band had begun to attract the attentions of some of the country’s best and most popular players in the fields of rock, bluegrass, Irish and other folk music. The decision was finally made to recruit some of these new players and re-launch Värttinä as a ten-piece, keeping five singers in the front line, including new member Sirpa Reiman, with five instrumentalists in the back line: Kari Reiman – fiddle, Tom Nyman – bass, Tommi Viksten – guitar, Riitta Potinoja – accordion.

To further their knowledge and experience, the band embarked on a series of concerts in Mari Republic, Russia, meeting with the traditional women singers there and learning more about their singing history and unique sound, harmonies and stories. Incorporating this information into their expanding repertoire, the singers took the vocal department several steps further, writing and arranging lyrics that were very provocative, dealing directly and sharply with love, courtship sex and marriage from a young female viewpoint. This confrontational yet fun-spirited female singing style and “naughty” lyrical content was perhaps the decisive factor in the instant massive success of the band which was, unbeknownst to the band, just around the corner.

The result was an overnight smash hit album, 1991’s Oi Dai, which became Finland’s biggest folk music phenomenon in twenty years, quickly propelling them to the status of household name and attaining gold record certification, today platinum. Word spread west to Ireland and the band made their first concerts there with six performances.

The successor to Oi Dai was 1992's Seleniko, produced by Hijaz Mustapha of the band 3 Mustaphas 3, which immediately entered the European World Music radio charts at the Number One position and remained there for three straight months. The chart success of Seleniko, which featured an increased number of original band compositions, attracted global attention and the album was released in North America and Benelux countries. The band did numerous European performances including shows in England at the Barbican Center and WOMAD Festival. The major turning point was the performance at Dranouter Festival Belgium which was a phenomenal success, instantly creating waves of interest across Europe.

1993 was another important year that began with a showcase headline slot at the SXSW Music & Media Convention in Austin, Texas followed by more European concerts with major appearances at Rudolstadt Festival in Germany and Glastonbury Festival in England. Phillip Page became manager of the band during this year and immediately set up North American activity. Also entering at this point was guitarist Antto Varilo replacing Reijo Heiskanen, while bassist Pekka Lehti replaced Tom Nyman, both departing players continuing on with other bands. At the end of 1993, Värttinä embarked on their first US tour, supporting the US release of Seleniko on the Green Linnet label, selling out eight concerts and gathering piles of rave reviews. Värttinä released their first video, the Seleniko song "Pihi Neito". The Finnish single "Kylä Vuotti Uutta Kuuta", ("The Village Awaits the New Moon") became a hit among fans and has remained a stage favourite worldwide.

In '94, Värttinä recorded their fifth album, Aitara, produced by Janne Haavisto and featuring drummer Anssi Nykänen. The Aitara album was a clear progression from Seleniko with more original songs and a harder rhythmic edge. Instantly upon release, Aitara entered the World Music Charts Europe at Number Five and was picked "Album of the Week" at Multi Kulti radio, Berlin. 1994 highlights included a live spot on European television with Baaba Maal and Angelique Kidjo in MTV's anti-racism video competition Prize of Europe. A major concert appearance for 1994 was Molde Jazz Festival in Norway.

In 1995, Aitara was released in Japan, Benelux countries and North America where the album spent five weeks in the Number One position on the CMJ College radio World Music charts. Aitara was also voted "Best Contemporary World Music Album" at the NAIRD (National Association of Independent Record Distributors) convention in USA. Värttinä returned to USA, with new drummer Marko Timonen replacing Anssi Nykänan, for their second tour selling out concerts in major markets This was followed by more European touring including Vienna Festival's "Out of the Cool" Nordic music event and a full house at WOMAD, Helsinki. Värttinä then made their second video, "Yötulet" (Night Fires).

Concert highlights for 1996 included a showcase slot at MIDEM music convention in Cannes, a thousand seat sell-out at Festival Interceltico in Oporto, more tours of Belgium and The Netherlands, two sold out shows with Leningrad Cowboys at the Meltdown Festival, Queen Elizabeth Hall in London, an opening slot with Björk at Pori Jazz Festival in Finland, another tour of North America including a support position for Joan Armatrading at the Edmonton Folk Festival with an audience of ten thousand. Värttinä performed in the WDR Folk Festival in Bonn, with a live television broadcast on WDR, then to the Lowlands Festival in The Netherlands. Värttinä also were featured guests in the 30th year anniversary concert of Finnish rock music legend Hector at Tavastia club where they performed his piece “Suurenmoinen Tyttö”, a recording which was later issued by EMI on the Hector tribute CD.

Vihma entered the European World Music Radio Charts at Number One in November. In USA, the album reached Number One in the CMJ New World radio charts. Vihma was voted "Best Album of 1998" in the Rock/Pop category of Adlib magazine in Japan and "Best World Music Album of 1998" from Music Magazine of Japan. Vihma and producers Richard Horowitz and Janne Haavisto, with Finnvox studios and long-time Värttinä studio sound engineer Risto Hemmi, received Master Award from BASF.

1998 concerts in support of Vihma included Celtic Connections festival Glasgow followed by a headline performance at Europa Sziget festival in Budapest and the Värttinä 15 Year Anniversary concert at Kihaus Festival in Rääkkylä, Finland. Additional concerts in Spain, then back to Japan for a one week tour. Värttinä appeared in San Remo, Italy for the nationally televised Tenco Festival and finished the year with more European concerts.

The 1998 album from British singer Tanita Tikaram, Cappuccino Songs, was released including a looped sample of the piece "Seelinnikoi" from Värttinä's Seleniko album. The popular American animated children's TV series Arthur licensed Värttinä's song "Matalii ja Mustii" from the Seleniko album, for use in an Arthur episode and later appearing on the Arthur CD and video.

Personnel changes this year: Markku Lepistö joined Värttinä on accordion allowing Susan Aho to move to the front line of singers. Singer/lyricist Sirpa Reiman left Värttinä to be a full-time mother, replaced by Riikka Väyrynen who was also working with the Adiemus project.

In early 2000, Wicklow Records released European and Japanese editions of Värttinä's eighth album, Ilmatar ("Goddess of Air"), which explored even further the Karelian runo tradition. Ilmatar was Värttinä's most extreme and adventurous album to date, a dramatic leap forward, featuring more complex and dynamic vocals, more adventurous compositions, extensive and effective use of percussion and a spacious production that allowed the music to breathe in ways not yet achieved on previous albums. One special highlight was the guest howl on the piece ”Äijö” by popular Finnish singer Ismo Alanko.

Critics hailed Ilmatar as “the album Värttinä was always meant to make ”Touring schedule for 2000 took Värttinä to Tokyo for eight performances at the Tokyo venue Tribute to the Love Generation, followed by European concerts including Babel Festival in Strasbourg, a return to Sziget Festival in Budapest for seven thousand people and Glatt & Verkehrt festival in Austria. Year’s end saw Värttinä at WOMEX Berlin, Archa Theatre in Prague and the Finnish Independence Day concert at Savoy Theatre in Helsinki.

Wicklow Records expired in 2001 and Värttinä recovered the rights to Ilmatar, with Värttinä management licensing the album to partners worldwide. The American edition of Ilmatar reached the Number 1 position in the CMJ World Music Charts.

Ilmatar was also licensed to MCD Brazil and supported by concerts at Rock in Rio festival with over 200,000 people and a date at Mika’s Bar (owned by filmmaker Mika Kaurismäki). Concerts continued with Glasgow’s Celtic Connections Nordic Nights and London’s Blackheath Halls. Värttinä finished the year with tours of USA and Europe, three concerts in Moscow and a return to Brazil for Todos os Cantos do Mundo festival in Sao Paolo and back again to Budapest for Sziget Festival. 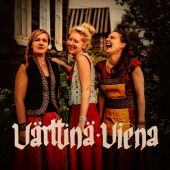 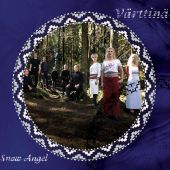 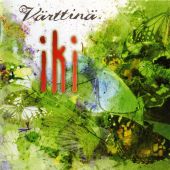