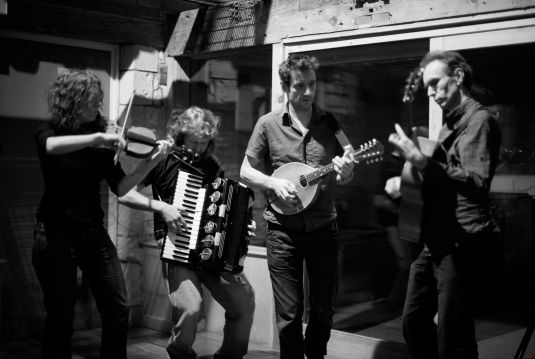 When I first listened to the music of Spiro, I thought it was really different. The sounds that hit you first are sounds that you are familiar with; they sound folky, but once you start listening to the music and how it's composed you hear elements of systems music - people like Steve Reich, Philip Glass, dance music. All sorts of musical influences are woven into this very contemporary music. I think this is soulful music, passionate music and I love it." - Peter Gabriel

"We're like a string quartet, but the most driving and exciting string quartet that you could imagine." Jane Harbour, the violinist of Spiro, is trying to put a neat handle on the essence of this instrumental four-piece. It's not an easy task. Despite the group's folk-friendly tools (violin, acoustic guitar, mandolin and accordion), they're something of a slippery beast when it comes to being contained by mere words. Guitarist Jon Hunt has a go. "We've got more to do with minimalist classical and dance music than we have with folk. Even though we use folk tunes, they're raw materials that the rest of the sound is built around."

One thing is certain - Spiro are their own people, commendably operating in their own sphere and at their own pace. This contemporary acoustic ensemble first came together through Bristol's folk sessions scene in 1993, trading under the name of The Famous Five. Now, a full 16 years later, they've only just got around to releasing their third album. Their first for Real World Records, Lightbox is an extraordinarily stirring record. Recorded over four days at Real World Studios in Box and largely produced by Simon Emmerson (the chief architect behind the Afro Celt Sound System and The Imagined Village projects), it showcases a highly imaginative and highly disciplined group with a sound that's unified but never uniform. All four members, all four instruments, pull in the same direction, creating music that's intricate yet so full of momentum. These are hurrying, scurrying soundscapes that sweep majestically with cinematic presence, echoing - at various points - the work of Steve Reich, Michael Nyman and the Penguin Café Orchestra. But, kindred spirits aside, this is the music of Spiro - undeniably English, undeniably theirs.

Despite a slew of work for theatre, film and television, Spiro remain something of an enigma, a well-kept secret that's only now starting to spread. Even in their hometown of Bristol, they're decidedly inconspicuous, thanks to their gentle, organic and snail-slow blooming. "There was never a grand plan," explains Jon. "It's just evolved. Some kind of magic thing happened between us that wasn't necessarily expected. It was quite serendipitous. We're all quite different as musicians and we each brought in particular passions and visions. It's all been about the interaction of those visions."

Their individual backgrounds are wide-reaching. Jane studied classical violin in Japan under the legendary Shinichi Suzuki and grew up "listening to a lot of vaguely modern classical stuff like Bartok and Stravinsky and Britten so I've got a lot of time for dissonance and strange harmonies and counter rhythms". She's also a sucker for dance music, "repetitive tunes that are really free and ecstatic". Accordionist Jason Sparkes began his own classical training during his pre-school years before taking up folk at the start of his teens, inspired by his morris-dancing father. Alex Vann was the drummer in a punk band before taking up the electric guitar and then graduating to his weapon of choice - the mandolin. Jon Hunt has also done his time in punk bands, someone who took an unusual route from pop to folk to punk to post-punk/new wave but emerged with "this preserved love and fascination for traditional English music".

This fascination means that Jon is the one who brings the strongest folk element to Spiro - "he's Mr Tunes!" beams Jane. "I do love northern English tunes," he concedes. "They're my obsession, so strange and dark and wonderful." Indeed, the tunes utilised on Lightbox are irresistible, in particular their fast-fingered take on The White Hart and the gorgeous, meandering traditional melody that threads its way through their song Pop. But it's what the group does with these tunes that sets them apart, using them as a launch pad to propel themselves to realms way beyond the folk music constituency. "I would be happy writing music that didn't have any tunes at all," admits Jane, "just riffs and grooves. But Jon's always pulling towards putting a tune in. That's what makes us so strong. There are people in the band who want to put in a perfect pop arrangement and others who just like to play weird stuff for a very long time!"

That the group still boast their original line-up speaks volumes for this sense of collectivism and solidarity. These are virtues that are writ large in their music, a commendable all-for-one sensibility. Listen to just a few bars of any track from the new record and that tight ensemble sound is both overwhelming and invigorating. "All of us are thoroughly energetic people," Jane explains. "We all operate at the tips of our energy and nerves. That really helps the chemistry. And we all play each other's parts so there are no 'ownership' issues. There are no egos - it's never 'OK, I'm just playing my part'." Jon nods. "There's no showmanship. There are no solos. There's no ornamentation to attract attention to one particular instrument. In fact, there's that feeling that each member of the band isn't just playing that instrument. That they're playing the whole thing."

This is what Spiro refer to as "the mesh", the locked-in ensemble sound that's a relentless, wonderfully overpowering assault on the eardrums. Although there are plenty of moments of quieter contemplation on Light Box, this unstoppable ensemble sound is in heavy evidence throughout the new record. It provides the fury on Captain Say Catastrophe, the momentum of Darkling Plains, the euphoria of Shaft. Think of it as an acoustic wall of sound.

"We're all playing more than one part at the same time," explains Jane. "If you listen to what any individual instrument is doing, it's really quite complex. I like the fact that the audience can hear a riff but might not be able to work out who's playing it. I think that's what gives it the widescreen feel. There are backed-up lines happening all over the place." "It becomes a bit orchestral," adds Jon. "It sounds like there are more than four instruments playing, even though there never are. We've never done a single overdub on any of our recordings. It's just always exactly as it would be live."

The arrangements are deeply complex and planned within an inch of their lives, with everything being meticulously picked apart, discarded, retrieved, reworked and often patched together in new sequences. It's a near-scientific approach. Tunes and riffs will be played at a band practice before Jane goes away to scrutinise and evaluate, pulling out the most interesting parts to be revisited next time around. "I'll come back and say 'Yeah, that bit. And put those bits together.' It's a continual process of listening back, of sometimes putting things together that weren't together in the first place. That's then the starting point for the next practice." A painstaking way of working? "It's obsessive! Everything is totally arranged, right down to the last note, the last semi-quaver. We can't divert from that. Yes, I am a mathematical geek."

It's therefore something of a contradiction that this forensic approach to composition and performance unlocks an extraordinary emotional response to their music, both on record and live. "There can be something strangely moving about something very mathematical," explains Jon. Jane agrees, citing the euphoria she often experiences through dance music. "I find repetition very moving. The more precise you are with it, the more you can engineer emotions. People seem to cry at our gigs!"

"We're just trying to get people hooked at an emotional level. I've always loved playing live, making things happen in a room, transforming all that nerdy work into an airborne experience. You can do this so much more by playing live instruments rather than pressing a button on a computer." Jon smiles in agreement. "It's a lot more interesting to watch people playing instruments than someone playing this slab of electronics…"

"…and it's a lot more interesting watching people struggling to play it!" laughs Jane. "I think that's part of the excitement. There's that element of danger. Are we going to make it or not...?"

"Spiro are at the forefront of the new wave of inspirational English acoustic music - unique arrangements that transport you into gorgeous landscapes. Essentially English, beautifully brilliant with timeless melodies." - Karen Tweed 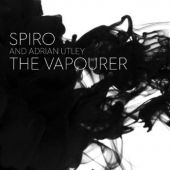 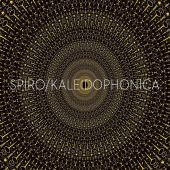 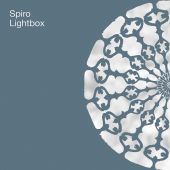