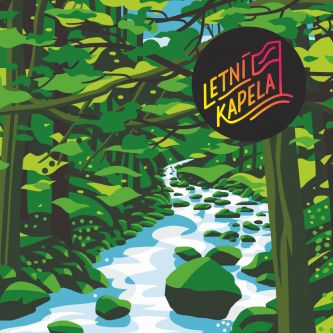 The new project of Jaromír Švejdík aka Jaromír 99 is called Letní kapela (i.e. The Summer Band) and the eponymous debut album is released on Monday, May 23, 2022.

Letní kapela (i.e. The summer Band) with Jaromír Švejdík (Jaromír 99) offers on their debut album a rock trip through the mountain region of rock melancholy and undisturbed polyphonic well-being. The clear sound of Dušan Neuwerth's recording, coming from the sources of the inspiration taken from the Czech Mountains of Jeseniky, is driven by the influx of memories and stories of Jaromír 99. Everything bubbled out through the fog of depression and was illuminated by the spring sun, resulting in a brilliant collection of eleven songs by Letní kapela. The texts of Jaromír 99 are part of the recently published book, Mimosezóna (published by Host).

"We come from a rock basis, but I hope there is a sense of blues, country, folk and folklore. We wanted it to be a hand-made, crafted record,” says Jaromír 99, and at the same time does not hide his excitement for the result. "For me, it's the best record I've ever participated in. Of course, we owe this mainly to producer Dušan Neuwerth, who gave the album incredible care. I wouldn't like to evaluate the songs as such, only time will tell."

Letní kapela is a new project of singer and artist Jaromír 99 (Priessnitz, Umakart, Jaromír 99 & The Bombers, Kafka Band). The project was born during the period of covid bans and gradually grew into a full-fledged band. After the first concerts, the intention to record the whole album came to light and, despite its name, will not be songs for one season. Jaromír 99 also admits that Letní kapela is a spontaneous name: “The name Letní kapela  (i.e. The Summer Band) rather refers to the time when we met with the musicians and did some music. When recording, we wanted to feel the joy of the music in the first place. It didn’t matter whether the songs were summery or not. I rather tried to make the lyrics have some common invisible red thread that gives the album its sense.”

And that the texts of Jaromír 99 can withstand the highest standards are proved by the current book published by Host. Thirty years of Jaromír Švejdík's work is captured under the name Mimosezóna (i.e. Off-Season). The texts are arranged chronologically in the book, so the end of the book belongs to Letní kapela and a bit of recollection. "Those lyrics for Letní kapela somehow popped to the surface during my covid walks along the river, among the trees, on the dirt roads. They are fragments of memories, of parents, of first love, of the house where I spent my childhood… Nevertheless, I think it's all written amicably. I try to take the world as it is, even if it is sometimes difficult."