“I think the tone of the violin, like the human voice, can express the deepest human emotions,” says Helena Vedralová. The album Zežali zvázali presents songs that talk about the joys and sorrows of human actions, about a whole range of experiences and feelings that cannot be summarized in simple words. Folk songs, hundreds of years old, still impress with their depth and truth and are the essence of immutable life values. On the new recording, you will find songs not only from Wallachia, but also from other corners of Moravia and Czech folk poetry.

“The album includes both newly prepared tracks and songs that were created over the years, complementing the old repertoire of Muziga and were transformed over time. But long before the actual recording, even though they were played in other arrangements, I heard them sounding the same way as on the new album,” Helena describes the album Zežali zvázali. “I chose songs based on whether they still speak to me today. In order to experience them, they must jump at me, so to speak, ” she says, explaining the decision-making on the selection of the songs. The changed line-up of the band with their instruments will remind you of traditional Moravian folklore ensembles. The violin and vocals of Helena Vedralová are complemented by the double bass player Petr Kořínek, who also participated in the arrangement of several songs. The pair, who have been meeting as Muziga for twenty-five years, is complemented by new blood, the drummer Markéta Vedralová and trumpeter Karel Mužátko. In addition to the four musicians mentioned above, Cécile Boiffin, whose marimba and claves can be heard in the song Horečka, and Marian Friedl, who added his double bass to the song Fuč větříčku, also contributed to the album Zežali.

Musicians of classical and jazz training, various roots and temperaments found a common way to serve the message of the folk songs. They come to life in their hands sometimes with joy, sometimes with sadness. As it used to be during harvesting, funerals or weddings, on the Zežali zvázali album it did not matter who was born where and what region they call home. It’s about the experience, its purity and the power which enables the possibility to share it with others. 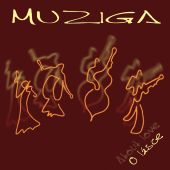