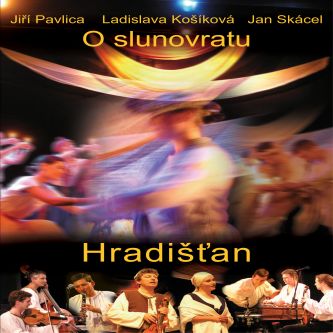 The CD of the same name is one of the most successful CDs that Indies Records have published for the whole period of its existence and it appeared in1999. In 2002, the publishing house Indies brought it to the music market as the golden edition, together with the original record of the evening of Hradišťan and Jan Skácel under the name Zlatý slunovrat (Golden Solstice). Jan Skácel’s verses set to music by Jiří Pavlica have, however, one more shape – with the dancing part of the group Hradišťan – in which the choreographer Ladislava Košíková participated authorially. The premiere took place on 30 April 1998 and the project can be rightly classified as one of the important moments in the development of the scenic inspiration by the folk culture in our country. The performance, which has been "fining down" and "maturing" in tens of repeats, was recorded on 31 July 2004 in the Culture Club in Uherské Hradiště and is intercut by artistic edits and shots that were filmed in Archeoskanzen in Modrá. DVD contains also the bonus materials, remarks to the program called O slunovratu (On Solstice) by Jiří Černý, Jaroslav Krček, Jiřina Mlíkovská and also the declaration of the authors of the program, Ladislava Košíková and Jiří Pavlica. DVD has two soundtracks to chose, stereophonic but also pentachannel 5.1 sound from the recording studio of Sono Records. The total length of the video record is almost 120 minutes.