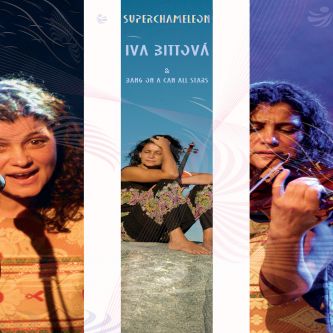 Ever since Bittova’s first appearance it was clear how much she had her own unique vocal and violin style adding vocal fantasies to this technique, and changing the way a violin is generally played. She deserves a giant compilation like this. The DVD contains first of all a full 90 minutes concert with the Bang On A Can All-Stars. This concert starts with a 30 minutes solo appearance of Iva Bittova. It is here where she shows, distributes and plays her own violin/vocal technique, where you can actually see what she’s doing : a combination of invention, intuition, a needlecontrolled skill, completely one with the instrument and voice, using I guess a good memory on some prepared schemes and themes. This performance includes vocal improvisations with some kind of overtones, a high range use of her voice, click-clacks, whistles, some song contexts or child babbling, and the unique kind of violin playing (playing melodies while plucking rhythmic themes on the instrument while singing at the same time). Several of her just-for-fun musicalities (like a game with tissue balls with bells) reminds me at the only concert I ever saw of hers, in The Vooruit, Ghent, which was a concert for children. Visual acts (like dancers dressed up with plastic tubes, or robot-like additional violinists) make the visual aspects complete and perfect. We never have the chance for a dull moment. One time she flies through the public herself like a doll, while playing the kazoo and babbling. The only solo recorded track of the group Bang On A Can All-Stars, sounds a bit wild and uncompromising, a thought-over composition (RIO styled), using a jazz freedom too, but still sounds a bit more chaotic than contemporary. Elsewhere they succeed to accompany Iva very well and create with her a specific atmosphere. While silent movie piano plays, Czech animations are projected in the background (there exist an important scene and history of animation in Czech Republic). The band adds his own contributions, arrangements and accents, like some duets with Iva on electric guitar and banjo, some surprises in song, and with handclaps. A surely memorable concert.

But that is not all. Next is a compilation of various live contributions. This ranges from her actress appearance in 1976, to various concerts over the years, a fragment of a documentary and her appearance with an orchestra, as well as an impressive, more classical piece with two violinists, with Dorothea Kellerova, a difficult piece which includes simultaneous singing by both artists ! Some of these appearance I wish to see complete one day (like the early Fajt/Bittova recordings). They are truly a respectful tribute that winkles a sympathetic smile towards her personality and appearance on stage.

But, once more there is more than expected. 60 more minutes of TV archive are added as well showing all kinds of different approaches. This collection features four folk/classical pieces with the Skampa Quartet, two concert fragments with the Nederlands Blazers Ensemble, for which were rearranged some popular Iva Bittova pieces, and four tracks of her album with Vladimir Vaclavek called White Inferno. Here she also plays thumbiano additionally to the vocals and violin, while Vaclavek plays the guitar, sings and plays percussion. One of these tracks is with a children choir, another has some visual aspects like old paper masks expressions, and one last track is transformed into a b/w video clip. Between two old solo appearances, a few live tracks with Dunaj are added as well. She did one album with them in her early musical career. Compared to some of the other appearances this is almost like post-punk, still with its own sophistication. The concert features two drummers on stage. Also featured on this archive is an originally composed Christmas concert song with guitarist/vocalist Vladimir Vaclavek, Jiri Pavlica & Lelky, a violinist and child choir. Different again is a more country song kind of appearance with Miroslav Donutil & Milos Stedron. Another early recording with percussionist Pavl Fajt and electric guitarist Richard Ferdinand, gives another slightly more alternative rock version of her own composition. The last color of the chameleon is the live performance with Manana, which shows a more experimental, melodically improvised approach of this band with Iva’s appearance and influence. All tracks are memorable for various reasons.

I am not sure if it is included with all DVD’s, but the DVD has one more, extra surprise. Perhaps meant as promotion are a few live recordings of the Hradistan folk cd on Indies records, and one Jablkon live track from the Oslava CD recording.

Considering the influence and support Iva Bittova meant for the existence of the Czech scene there is no doubt of her importance. The DVD shows a glimpse of that scene and is a very good starter that I hope will increase the deserved international curiosity.