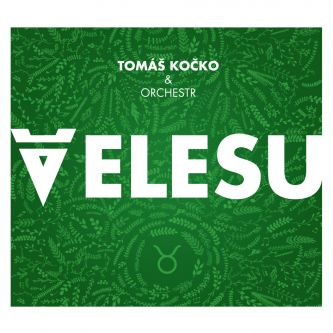 Also known as Tom Cat, Tomáš Kočko is a songwriter, film and opera director, an actor and a researcher into Moravian artistic history and religion. The nine tracks on Velesu, his ninth album, were produced and almost entirely composed by him.

The lyrics are all sung in Czech and thematically this collection deals with the ancient god Veles, superintendent of the afterlife and in charge of order and time –  incidentally, also the patron saint of buskers. Tomas believes we carry traces of ancestral emotions deep within us and that his music can evoke these feelings.

Regarding that music, it’s a fascinating mix of more traditional folky sounds including violins, cimbalom , mandolin and pipes, together with brass, rock drums and heavy-metal guitar. Most of the songs have strong hook-lines and are very catchy: the album’s danceable too. Tomas is the lead vocalist but most of the band also sing  – including the two female members Libuška Cerná and Helenka Vyvozilová, most effectively on ‘Dokola’, a track with a great jew’s harp didgeridoo sound, where the male-female voices trade off against each other with considerable passion. The title track ‘Velesu’ is fast-paced and despite the occasional gloomy peal of a bell, ends in an almost Cossack style bass solo, typical of the wonderful blend of textures on this album. The final track ‘Vnuk’ (Grandson) is also the longest, at just under seven minutes, and again is a weave of different styles with its quiet cimbalom intro followed by heavy electric guitar and drums. There’s an impressive multi-tracked violin solo towards the end and Stanislav Pliska plays tight, stylish drums throughout. On all these tracks and others, Bronislav Šmid deserves credit for mixing – many of the tracks are very multi-layered and at times, notably on ‘Jarovit’, are reminiscent of Talking Heads during their Brian Eno period.

The band have previously played all over Europe from Russia to Ireland and are gigging regularly this summer but alas only in the Czech Republic. If you can’t catch them live, try them recorded: whatever you feel about pagan gods, you can still enjoy this album.