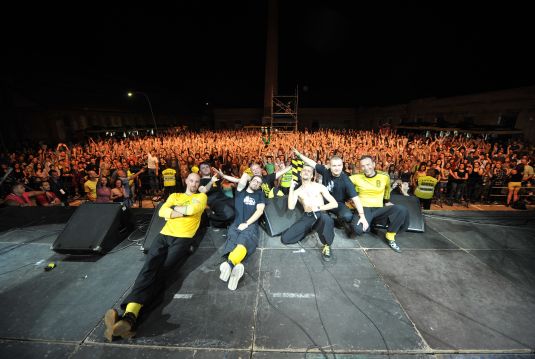 This year, if you read the nominees for IMPALA’s Independent Album of the Year, you will notice the name Dubioza Kolektiv. To the uninitiated, DK are a band from Bosnia known for their fresh take on hip hop, mixed with reggae, dub, rock and Bosnian folklore; others more familiar with the name know them as a killer live band, and notorious leaders in the fight for social change in their home country. Though relatively new to audiences in “The West”, the group has already established itself as among the best and most popular live outfits in Eastern Europe, and with the international release of their upcoming album “Wild Wild East” in Summer of 2011, their recognition will only continue to grow.
So what makes them different from everyone else? Well, for one thing, their personal story. In fact, all of them spent their teenaged years in the middle of a war, under siege. Carrying thousands litres of water over long distances was a daily chore, all the while never knowing what bullet or shell would end their lives, or the lives of their family and friends (many of whom were killed or injured). And yet, through making music in basement shelters (as long as the electricity worked) is how they learned to play their instruments, and more importantly, how to resist the negativity of the war. This is a band that takes music seriously.

Initially, the concept of the band came through an urgent need to voice the problematic issues in Bosnian society, while also showing the rest of the world that life in the Balkans exists outside of the familiar and overused media stereotypes. Understandably then, many of Dubioza Kolektiv’s lyrics revolve around themes of peace, understanding and tolerance, alongside an extreme criticism of nationalism and injustice; but what gives these lyrics weight is that they speak with the authority of direct experience.
DK is well known in Bosnia for practicing what they preach. They have lent support to the first grass-roots civil society group “Dosta” by recording a special song for the movement, and organizing a huge protest concert before 2006 general elections. Their album release party for their fourth album “Firma Ilegal” took place in front of the Bosnian Parliament, in a powerful statement against government corruption, and garnered massive coverage in the national press. Finally, in 2010 the band spearheaded a national voting drive with concerts in all of the major Bosnian cities, aimed to increase the turnout of younger population in 2010 elections. These shows were considered a complete success, with packed venues, thousands of young people registering to vote.

Now, after eight years and five albums under their belts, (their sixth, “Wild Wild East”, due for international release in September of 2011), they can claim a list of accomplishments that would make any musicians proud: a diehard fan base (“5 do 12” boasts over 100,000 downloads and counting). Outside of the Balkans, they’ve been nominated for “Independent Album of the Year 2011”, have been recognized by the BBC and Time Magazine as a legitimate voice of Bosnia. Now, with the support an international record label and months of touring ahead, there is nowhere else for the band to go but up.

But let’s back to the music: if you’re looking for macho, money-and-ego driven posturing, you won’t find it here; no MTV “rude boy” gangstas, no strippers or bling, no brands or corporate endorsements from the international fashion industry. Rather, they take on the traditional musical forms with their unique perspective, shaped by a war that changed their lives forever; and all done in a blast of positivity that feels like breath of fresh air. 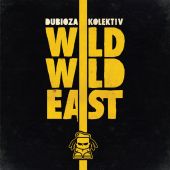