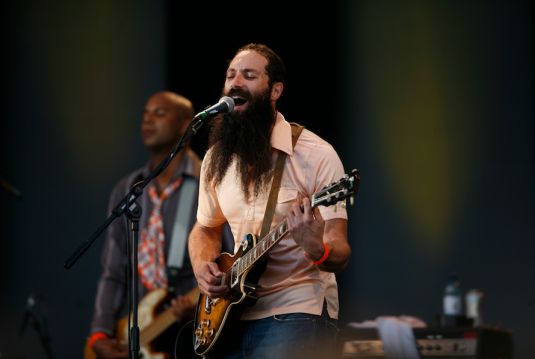 It's time to make room in your life for a burning fever: Dengue Fever, the Californian sextet who met at the crossroads where Phnom Penh intersects with Long Beach, and whose Mekong Delta groove is a joyous noise from deep within the heart of darkness.

Venus On Earth, their third album, is a tropical cocktail of Cambodian colour. Their most ambitious set to date, it grooves on the inimitable ambience of the riverside bars on Sisowath Quay, the fried-tarantula stalls at Psah Thmei, the yellow-noodle restaurants in Siem Reap and the beaches of Kampot when the sun is setting and the coconut shells overflow with palm wine.

Though self-penned and recorded in Los Angeles, Venus On Earth was inspired by the band's experiences on two continents. Tiger Phone Card tells of a long-distance romance between Phnom Penh and New York, with the method of communication as prominent in the title as the brand of beer drunk before the calls are made. Economic necessity means it's a situation many Phnom Penhois know well. Cambodians just can't resist a sad song, but it doesn't take a Khmer speaker to feel the emotion in Monsoon Of Perfume, a song of overpowering love going unrequited. Integratron (named after a rejuvenation machine near Joshua Tree, CA) takes the band back to one of their original influences, the Ethiopian jazz of Mulatu Astatque.

Oceans Of Venus is an instrumental that could only have been dreamed up by the children of an unlikely alliance involving Joe Meek and Dick Dale. Mr Orange is a full-steam rocker, the sort of song that made Huoy Meas a star at the end of the 1960s. Using the unique sound of the Khmer rock-music explosion of the late 1960s and early 1970s as its template, Venus On Earth reminds us of a forgotten time and brings it back to life in the 21st century. You can almost smell the jasmine.

But we are getting ahead of ourselves. Who even knew there was a Cambodian rock scene flourishing in Phnom Penh during the days when the city was haven for those trying to escape the war in neighbouring Vietnam? Where singers such as Sinn Sisamouth, Ros Sereysothea and Pan Ron were as revered as Bob Dylan, Aretha Franklin or Janis Joplin and rocked as hard as Santana, Them and The Kinks.

In 1975-9, their idyllic way of life was destroyed by Pol Pot's Maoist government, and among those singled out for the worst treatment were the artists. Dancers and musicians were systematically eradicated, yet their spirit lived on long after the Khmer Rouge lost power. In the 1990s, when normality finally returned to the streets, people wanted to dance and sing again. All they had, however, were the old songs and their memories.

In 1997, Ethan Holtzman picked up some cassettes of the old pop hits at the central market of Phnom Penh while backpacking through Southeast Asia; thousands of miles away, in Los Angeles, his brother Zac was listening to Cambodian Rocks, a bootleg CD with many of the same songs. Although neither had any idea what the tunes were called, what the lyrics said or who the artists were, the unique blend of what sounded like a combination of psychedelia, jazz, 1960s pop, Brazilian Tropicalia, Bollywood soundtracks and surf music soon had its hooks in them.

With good friend Paul Dreux Smith on drums, they decided they needed a vocalist who could both understand the songs and do them justice. Ethan takes up the story: "After a couple of weeks listening to the music, we wanted to see if we could put a project together to play it, so we had to find a singer. That's one great thing about LA, it just so happens there's a very large Cambodian community in Long Beach, in our back yard. We got lucky." Nevertheless, it wasn't until they met a Khmer in a pool hall that they got on the right track. He told them they should be looking in the local restaurants, where singers entertain diners before passing round the karaoke microphone. Enter the supremely talented chanteuse, Chhom Nimol.

"I was born in Battambang, in the west of Cambodia, in 1980, just after the Khmer Rouge were chased out by the Vietnamese army," says Chhom Nimol. "When I was one, I went to Thailand with my parents and brother, where we lived in a refugee camp. My sister stayed behind. We did not return until there was peace. Like all the other refugees, we were put on a bus in 1993 and sent back.

"I started singing in restaurants four years later. I was crowned best female voice of the year. After that my life changed. There were a lot of live shows and concerts on television where I would sing traditional music. I was touring the country singing Cambodian songs, performing for King Sihanouk and the Queen."

In 2000, Nimol was invited to America by some expat friends. Once there, she decided to outstay her visa, and started singing daily in the Dragon House restaurant. One night, the Holtzmans turned up. They had heard a few singers by then, but instantly knew Nimol was the one. "It was so weird, oh my god," she laughs. "At that time I didn't speak or understand much English. So I didn't know what these two guys wanted. Ethan gave me a tape with six songs they had learnt and, of course, I knew them. Really famous singers such as Ros Sereysothea, Pan Ron ... I asked my friends and family: do I want to sing with a band like that?"

The brothers frantically assembled a band that could do justice to the singer's talents. "I called a college friend, Senon Williams, the bass player with The Radar Brothers," says Zac. "It turned out he had been to Cambodia and already knew the songs. But he's a busy musician, so I had to bribe him, I told him I'd come and pick him up, carry his equipment and supply the beers at the rehearsals." Having agreed to audition, Nimol brought an entourage with her, in case the band turned out to be something else entirely. When she arrived, other Khmer singers who had come to audition all recognised her and, realising they had no hope, left.

The rehearsals were a success, so Dengue Fever decided to test themselves in public. Just before their first show, Zac phoned David Ralicke, who formerly played sax with Beck. "I told him if he wanted to come down and play he could. He didn't even practise with us, but it tore the house down. And we've had the same line-up ever since our very first gig."

The sextet started playing up and down the West Coast, playing to mixed crowds of curious rock fans and even more curious Khmers. In 2003, their eponymous debut album introduced a wider audience to the songs of Sereysothea, the most popular female Cambodian singer of the golden age.

At this point, a brief disaster briefly halted their progress: Nimol's expired visa came back to haunt her, but the band stuck by her and raised money to pay her legal fees. Eventually she was awarded residency.

Their second album, Escape From Dragon House, arrived in 2005. A significant leap forward, it found a band able to slip between Khmer and English and writing new songs that both kept alive the spirit of the original stars and could have come from the pen of the singer-songwriter Sisamouth. With their growing reputation as a terrific live band, there was still one obvious place they hadn't played: Cambodia. In autumn 2006 they arrived in Phnom Penh, unsure what the reaction would be to a bunch of Americans playing music they should never even have heard.

"Cambodians had never heard white people singing Khmer lyrics," claims Nimol proudly. "It was strange playing for Cambodians crowds in the shanty towns," adds Ethan. "They are very reserved and never clap. But after a show they would all come to thank us and talk to Nimol. She is a real star there." They took time to meet traditional master musicians, including the chapei player Kong Ney, who toured Britain and played WOMAD in 2007. One of the highlights, however, was their meeting with a troupe of children who lived in a riverfront squat were learning traditional songs and dances. This summer, the unlikely collaborators hope to meet up and perform at the WOMAD festival.

With a summer of European festivals ahead of them, the band are keen to see how Venus On Earth fares far from LA's Little Phnom Penh. Paul, however, adds a sobering note to Dengue Fever's reputation as a peerless party band: "I didn't know the history of the music when I started playing it, these were just cool tunes that sounded familiar and different at the same time. Now I hope that by playing them we shine a light on them for others."

"But we're not historians," adds Zac, "It's music we love and it's a privilege to be able to help it live on."

Nimol gets the last word: "We're different from all the other Cambodian bands. At the restaurants down Long Beach, they play original Cambodian songs, all slow, circle dances, tango, cha cha cha. That's for old people. We're different. We're rock."

Now all we need is a tropical summer. What a lovely way to burn. 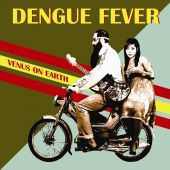