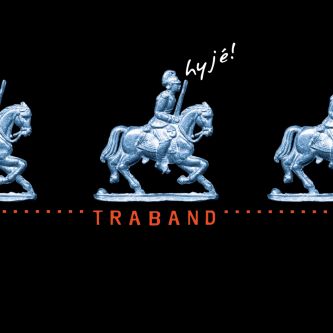 
Cz-Cz-Czech It Out; Or, When in Romany
A bunch of crazed Romany punk funk rebels in the Czech Republic just made of my favorite records of last year, and I have no idea how you will ever find it. You probably have to go to the label's website (Indiesrec.cz) or something, because I don't know what the distribution is for Indies Records, Brno's finest. But you have to try to find this album, because it's nothing short of asskickery at its finest.

What they do here is to take the traditional Eastern European brass band idea (trumpet, tuba a.k.a. "bass bugle"), add an accordion and a bombardon and a banjo and a drum kit (no surprises so far), and then go farther by falling in love with every awesome kind of music in the world. They begin "V BabylönC" by quickly quoting, in brass, Gershwin's "Rhapsody in Blue", and then go on to turn into some kind of crazed klezmer marching band speedcore, complete with rowdy shouted vocals. "Kdyz si bajecnou zenskou vezme idiot" is ragtime polka, with a lovely sneering vocal by female trumpet player Jana Modracková about what happens when a good woman marries an idiot. (Do I speak Czech? Despite my last name, no; all the lyrics are on the band's website. Other tunes, like "O malém rytiri", sound like rock, but reflected through a different mirror, one in which all the clichés have been erased.

The main mastermind behind this band is Jarda Svoboda, who writes all the lyrics and just about all of the music and who sings lead on most of the songs. He has a big rough-edged imprecise voice, a beast of an instrument that goes after huge expansive songs like "Zlodej a dezerter" like a tiger on a steak. The first bit is chanted and murky, with Jana doubling him, but then his growl rouses itself into rock-star status. And as far as I can tell, he's some kind of poet; on this song, the lyrics in translation include this nugget: "I cannot sleep, sometimes even until the dawn / Waiting for the morning, waiting for a deathblow out of mercy in the darkness / There's no star in the sky tonight / Three kings are bringing their gifts to the baby in the manger / But the manger is empty and I am scared."

The inventiveness of Traband is pretty impressive. "Lovci lebek" is descending-scale doom, with an electric bass backing up Jakub Schmid's tuba honks, with Svoboda whispering weird words about head hunters and soulhunters all over the place; suddenly, we're in a 1960s psychedelic break full of chiming banjos and something that might be a flute. "Vratte mi mou hlavu" starts with some creepy beatboxing (suitable for a song that translates to "Give Me Back My Head"), and then turns into a Celtic jazz romp with the addition of the band Naholou 25.

And when they kick out the jams on "Mraky" ("Clouds"), big percussion and handclaps and yelling about the emptiness of modern bureaucratic life, it's pretty inspiring. This kind of Brecht/Weill cabaret/drinking song/beatdown is the original template for all of Tom Waits' later career, but in Czech it sounds fresher and realer and more authentic. Plus somehow Australian, I haven't worked that part out yet.

O the banjo funk of "Marie!"! O the way "Nemám rád trpaslíky" updates "Short People" by claiming that "I don't like dwarfs" and then admitting at the end that WE ARE ALL DWARFS! O my wild Slovak soul! O the joys of new music that respects all horizons and favors none!