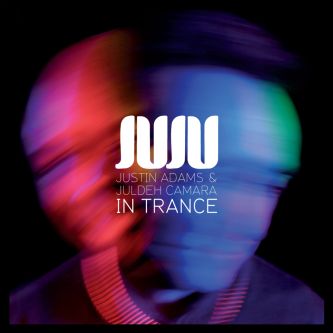 The new album recorded live to capture the spirit of JuJu’s electric performances on stage - channelling trancey rhythms from traditional Africa, leftfield jazz and the wilder end of rock. Not long ago, on a night lit up by a fat golden moon, JuJu took a trip. Fuelled by rocking guitar and one-string swing, by backseat bass and Afro-jazz beats, Justin Adams and Juldeh Camara travelled to the place where tradition meets psychedelia – and then teetered, out there, on the edge. Theirs was a journey of rhythmic circles and open spaces, a journey over age-old grooves and along futuristic highways: a journey where the destination - with its whirling spirals and other kaleidoscopic motifs - counted as much as the journey.

“We just came together, plugged in and played,” says Adams of In Trance, a onetake marvel that begs repeated listening. “We played it exactly as we play it live. It was a bit like controlling a runaway horse - that is completely spooked!” If JuJu’s chemistry was evident on their acclaimed 2007 debut Soul Science and its equally praised follow up Tell No Lies, it is almost palpable here. In Trance is precisely that: an album that sees Adams’ Les Paul goldtop vying and blending with Camara’s keening bittersweet vocals and fiery ritti playing, and embracing dub reggae and avant-garde jazz en route. Tracks build and circle, layer and knit.

Melodies interlock, rhythms cross and the drone guitar builds a web of sound with an African aesthetic and heavy rock fervour. The two men’s spooky musical empathy is evident to anyone who has ever seen them tear the roof off live. “Justin’s playing gets inside my body, and I can hear the music in his head,” insists Camara. “Justin plays African style.” It’s no secret that the roots of rock (and indeed, blues and reggae) are earthed firmly in the Motherland. Calling on the griot skills he honed in childhood Camara peels off riffs on his ritti like some be-robed Gambian Hendrix, his Fulani-language lyrics only adding to the hallucinogenic feel.

The recording magic took place at Real World Studios, where new band members, Dave Smith and Billy Fuller, brought their own unique strengths to the mix. In the studio, JuJu have created five new tracks that make your body pulsate – music that is raw and swinging and has that slightly distorted sheet-of-sound vibe that Moroccan artists like The Musicians of Jajouka have, where everyone is doing their own little pushes and pulls and twists and twiddles and weaving an incredible sonic web. Two tracks, Mariama Trance and Deep Sahara have previously appeared on the
EP, The Trance Sessions. Juldeh Camara is a Gambian singer and ritti maestro who was taught to play the single-string West African fiddle by his blind father, who himself was taught directly by the djinn. Having lived and worked in traditional Fula society as a griot – the hereditary poets, praise singers and musicians who carry the cultural knowledge of their people – the UK-based Camara is used to vibing in ways that draw people in then send them somewhere else - to a consciousness-expanding, often mindblowing state.

Justin Adams is widely regarded as one of England’s most innovative and original guitarists and a child of punk whose long and varied CV includes producing albums by Saharan desert bluesmen Tinariwen and collaborating with the iconic likes of Robert Plant, Peter Gabriel and Jah Wobble. Bassist Billy Fuller has collaborated with everyone from fellow Bristolians Massive Attack and out-there triphoppers Malachai to Robert Plant and The Strange Sensation (in which Adams plays lead guitar); he’s a member of cult indie industrialists Beak (alongside Portishead’s Geoff Barrow) and does a whole lot more besides.

Dave Smith is one of the finest and most versatile young drummers in Britain. Both influenced by and steeped in West African percussion and classic jazz drumming his explosive style and musical sensitivity has won him shed loads of respect, regardless of genre. As co-leader of Outhouse, a group founded under the aegis of London jazz cooperative Loop Collective, Smith has collaborated with numerous international experimentalists; his group Outhouse Ruhabi – which he developed in the Gambia with five sabar drummers – explore the parallels between jazz improvisation and
traditional West African music. Ex-Shriekback rhythmist Martyn Barker features on the two tracks from The Trance Sessions.

“The whole album evolved in a very fast and spontaneous manner,” says Adams. “We just went into the studio and did five live takes without headphones or overdubbing. We set out to make swing music, dance music, trance music; we got all those things.”
All those things, and more…. 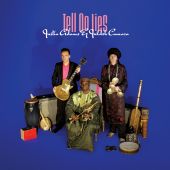