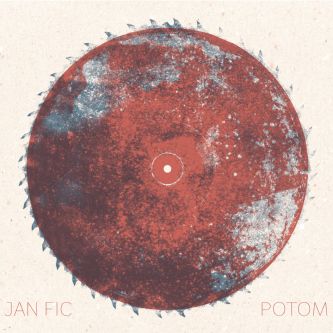 The album called Potom (i.e. Then) was composed and recorded by the singer, guitarist and guitar maker Jan Fic. The original songs, full of strong statements about the present, were produced by Martin E. Kyšperský. This new album is the second record of the original singer-songwriter after starting his solo career and is much closer to blues rock than to indie folk. The 11 song collection, depicting the clash of the poet with reality, is released on September 11, 2020.

Jan Fic announced a new record some time ago with the single Podvedená generace (i.e. Cheated Generation). This song has already shown that the whole album will be about the statement of the current state of the generation that has lived most of their lives only after the fall of communism. "POTOM is such a western story, where the protagonist purposefully co-creates the plot, actively fights for his happiness and I think quite fiercely and bravely," says Jan Fic, who recently won the award "Za krásu slova” (i.e.For the Beauty of the Word) from Radio Proglas. "I was surprised that my lyrics appealed to someone like that. I try to avoid various clichés and I like to play with the rhythm and phrasing of the text to make it sound like a carelessly said thing, but with some tension in it. And that's what I tried on the new album Potom."

The power of stories and the imagination of Jan Fic's lyrics is only one part of his second album. Eleven songs have emerged from the blues haze of bar-dirty melodies and form a strong collection of the original singer-songwriter. "My previous album was musically a bridge between my blues past and folk. There was still more blues. The current POTOM is already blues, in my opinion, more in terms of the theme and the mood rather than the form. I realized that I really don't have to be limited by anything," says Jan Fic. Martin E. Kyšperský, the leader of the band Květy, helped to complete the tracks. The resulting sound is therefore far from the sleek pop folk, but on the contrary, it perfectly captures the sometimes gloomy atmosphere that the songs have.

The collaboration of Martin E. Kyšperský and Jan Fic also resulted in a concert form. "The production role of my recordings was an interplay of coincidences, but I'm really happy for it. I built and repaired some instruments for Martin, and this collaboration just came out of it. And dare I say, I hope that the enthusiasm and satisfaction is mutual, so we happily continue at the concerts.” Who knew the previous band of Jan Fic, The Weathermakers, may be a little surprised at the concerts. "Although I love blues, I don't have just this genre in me" admits Jan Fic. "Playing solo gives me more freedom. I perform like a singer-songwriter alone, I enjoy it, it's personal, intimate. But I also like the sound and mood of the band, I like it when sometimes the music is full on, so when I can play with the whole band (and I dare say that my current concert line-up is really strong), I'm very happy about it and it charges me.”